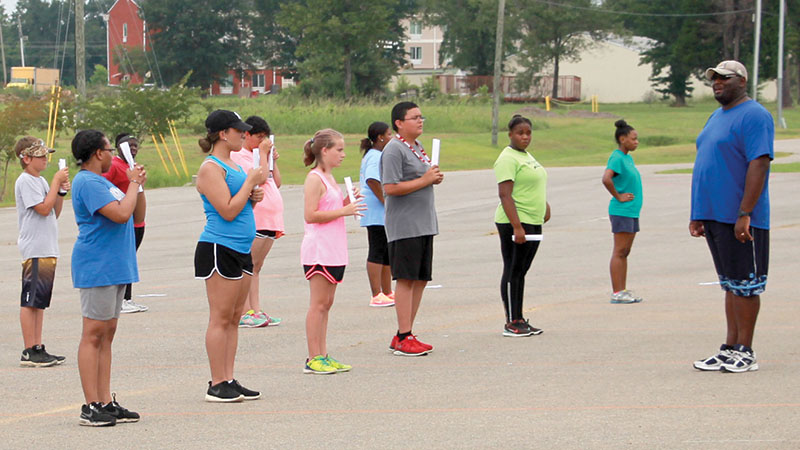 Frederick Scott, the new band director at Demopolis High School, works with members of the River City Blue during band camp, which is being held this week.

Demopolis High School’s new band director, Frederick Scott, has big plans for the River City Blue band. Scott was hired as the band director during a school board meeting in April and he assumed his new post on Saturday, July 1. He was the previous band director at Red Level High School in Andalusia, Alabama.

Scott and his family have settled in Demopolis and he has been impressed with the kindness he has received from the community. “The people here have been phenomenal. They have been so generous and so nice and I cannot thank the Board of Education members enough for this opportunity.” 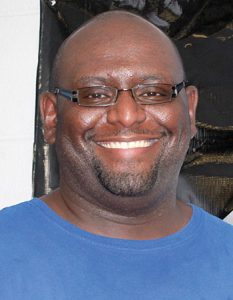 Scott is also pleased with summer practices so far. He said that despite the late change in band directors, the students and parents have stepped up to the plate and have been very helpful to him. It has made his transition to DHS that much easier, he said.

This year’s band has approximately 70 members and Scott wants the program to grow to where they have 100 people or more consistently. And to achieve that goal, Scott wants the students to set their minds on achieving the superior rank. In band competitions, bands are given ranks based on their performances and the effort they put into those performances. He believes that if he can get the band students to think of themselves as a superior band, then the program will continue to be successful.

Band practice began July 10 with three evening rehearsals for two hours each day. The week of July 17 featured a four-day rookie camp for first time marchers and student leaders. This week begins band camp that will continue into next week. On August 10, the band will host its Parent Preview night where parents and the community can see what the band has been working this summer.

The band’s performance has a Motown theme with songs like “I Want You Back” by the Jackson 5, “Ain’t No Mountain High Enough” by Marvin Gaye and Tammi Terrell, and “My Girl” by the Temptations.

Scott has also lined up competitions for the band, which includes the Troy University Festival on Oct. 7 as well as the Gordo Marching Competition on Oct. 28.

Scott is looking forward to football season and is excited to see how much the band members have learned over the summer.

“I’m very excited. I love football season and marching band and I love the atmosphere of Friday nights in the fall,” Scott said. “I’m also looking forward to working with Coach Seymour and the football team and everyone who works together to make Friday nights special. But, I especially cannot wait until the River City Blue steps into that stadium for the first time and everyone sees what we’ve done this summer.”

(This article originally published in the Wednesday, July 26, print edition of the Demopolis Times.)