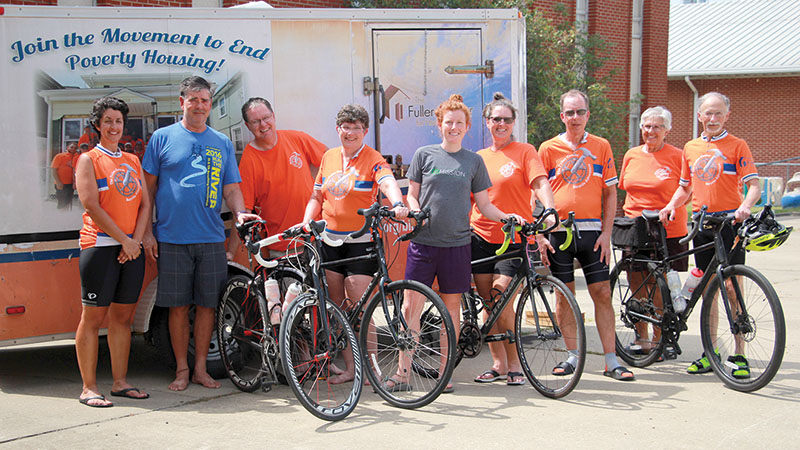 A group of cyclists pedaled their way through Demopolis Tuesday afternoon and stayed overnight to raise awareness and funds for poverty housing.

The Fuller Center Bicycle Adventure is celebrating its 10th year of raising funds to combat poverty housing by trying to raise a record $400,000 this summer, which would put the ride’s all-time fundraising over the $2 million milestone.

This year’s cross-country route takes the cyclists 3,600 miles from San Francisco to Savannah, Georgia, averaging about 75 miles of riding per day through its August 5 conclusion. In addition to raising money and awareness for the non-profit Fuller Center for Housing, cyclists will participate in six build days along the way with other Fuller Centers. In order to take part in the ride, riders had to raise a minimum of $4,000, and many of them exceeded that goal.

The Fuller Center for Housing is a nonprofit organization founded by Millard Fuller in 2005 that seeks to eradicate poverty housing by promoting partnerships with individuals and community groups to build and rehabilitate homes for people in need.

In the last nine years, the Fuller Center Bicycle Adventure has helped hundreds of people have some of the most meaningful experiences of their lives. They come to ride bikes and change lives by building houses along the way, but they leave finding themselves the ones truly changed and with friendships made for life.

Cyclists arrived in Demopolis on Tuesday after an 88-mile ride from Newton, Mississippi. At the time of their arrival in Demopolis, they had traveled 3,000 miles. They stayed overnight at the First Baptist Church before leaving Wednesday morning to begin their ride to Selma.

Some of the riders joined because they wanted to contribute to helping less fortunate people. “I wanted to ride across the country, but I wanted to do more than just say I rode across the United States,” said Judy Nast. “I wanted to help other people. So when I found this bike ride, my family helped to raise enough money, and here I am.”

While on the bike ride, Nast worked on a new house in Craig, Colorado and helped paint all of the doors in the house. While in Shreveport, Louisiana, she and others in the group painted the outside of the house.

The thing that Nast has enjoyed the most about being part of the bike ride is meeting the different people. The group is full of people from all over the country that have come together to fight poverty. She also enjoys slowing down enough to take in their surroundings. “When you ride a bicycle, you go slow enough and really get to see God’s creations. You get to see mountains and animals and things we hardly ever see or think about. Riding across the country gives us the chance to appreciate all the things we take for granted.”

(This article originally appeared in the Saturday, July 29, print edition of the Demopolis Times.)