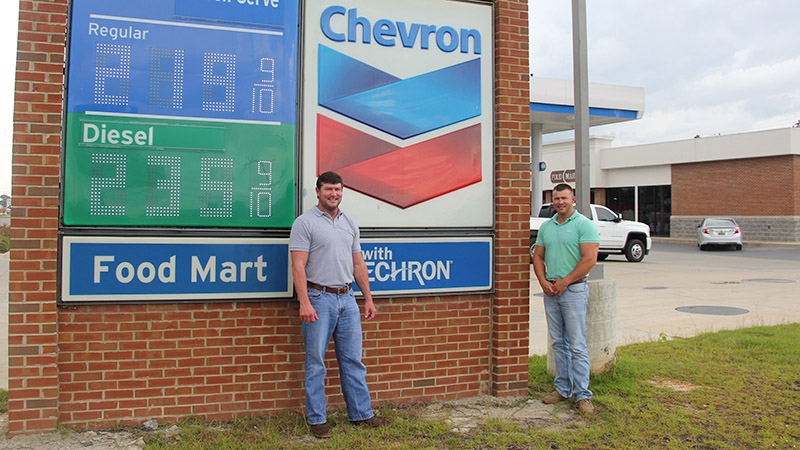 Joe, left, and Jim Parr outside their recently remodeled store at the intersection of Hwy. 80 and Hwy. 43 in Demopolis. After 75 years, the Parrs own and operate eight stores, including four in Demopolis and another in Linden.

It was 75 years ago that Howard and Irma Parr began in the gasoline business in Demopolis. Through the years the business continued to grow as new generations took the reigns.

Howard became involved in the business as a commissioned agent with Standard Oil, later becoming a distributor for Chevron. His role in the gasoline business continued to grow until he opened his first store. Over the years, that single store led to others and today Parr’s Chevron operates eight stores, four of those are in Demopolis with another in Linden.

As Howard and his wife, Irma, operated their business, he soon welcomed into the fold his son and a daughter-in-law, Higley and Paula Parr. The two worked side by side for a number of years.

“Our grandfather ran the bulk plant and Higley ran the store. And, you had Irma and Paula running the office,” said Joe Parr, one of Howard’s grandsons who operates the business today along with his brother, Jim Parr.

After growing up around the gasoline and convenience store business, Jim and Joe each graduated high school and went off to college. In 2000, after attending the University of West Alabama, Jim returned to the family business. Joe would follow a few years later after attending UWA and the University of Alabama. In 2002, Howard, the man who started it all, passed away.

The younger Parr brothers were ready to step in and to their part to carry the family business forward and into the new millennium.

“We both delivered oil as teenagers and worked at the bulk plant. I certainly hauled my share of loads. When I came home (from college) I was prepared to take over the operation,” Jim said.

Today, the two brothers work side by side, along with their father who is still very involved in the business.

Jim said he feels the Parr family has been successful because of the relationships they have made over the years with customers.

“This is a very fun and rewarding business,” he said. “We feel we have a personal relationship with our customers and employees. It’s not just transactional for us.”

Both brothers are quick to say that, in the end, it is their employees that make their business a success.

“We would not be successful without them,” Jim said. “We have long-term employees — one has been with us 35 years and there are others who’ve been around for a lot of years.”

“They are the face of our business and we are lucky to have great people at all of our stores,” Joe added.

It is those relationships that the Parr brothers feel makes their business special.

“We would not be successful without our grandparents, parents, employees and customers. We want our employees to feel like family and our customers to be happy in knowing they are getting quality products and the best service,” Jim said.

When Jim came back from college, there were three Parr’s stores. They have added five since then with stores now in Demopolis, Linden, Greensboro, Thomasville, and Selma.

“We hope some day our kids will want to come back to work with our customers and continue what our grandfather started,” Jim said.

(This article originally appeared in the Saturday, August 12, print edition of the Demopolis Times.)