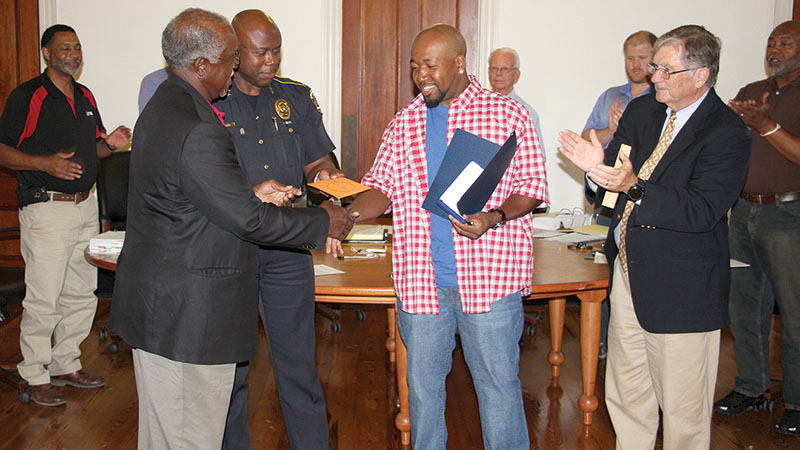 Barry Williams, center, is presented a gift from Robert Wagstaff, brother to a woman who Williams pulled from a submerged vehicle, during a special presentation ceremony held at the Demopolis City Council meeting Thursday. Williams was also presented with a Medal of Valor by Police Chief Tommie Reese and a Key to the City by Mayor John Laney.

Barry Williams says he has seen a lot of things on the road as a truck driver, but what he saw — and more importantly what he did — will forever be remembered by one family and has given him the title of real-life super hero.

Williams, a resident of Moundville who is a Cemex contractor and owner-operator of New Line Transport, was driving on Hwy. 80 in Demopolis on August 1, at about 1:48 p.m., when another truck passed him. He watched ahead as the truck, coming back over into the right lane, nicked the bumper of a vehicle being driven by 68-year-old Octavia Wagstaff. 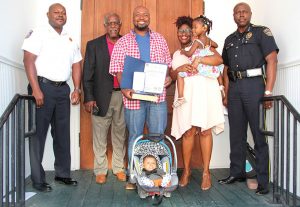 “He cleared me and came straight over and hit her bumper,” Williams said. “She missed the guardrail, went airborne and twisted around into the water.”

Williams stopped his truck and ran to the bridge.

“I remember standing there a second to see if she was going to come up. When I saw she wasn’t getting out I decided it was either running back around to the other side of the bridge or jumping in. I jumped over the ledge and slid into the water.”

Once he got to the vehicle, Williams grabbed the door and used his feet to pry the door open. He began pulling to free Wagstaff, but then realized she was wearing her seatbelt. After getting his breath, he went back under to take off the seatbelt.

“By that time another guy had come to help and we pulled her to the (creek) bank,” Williams said. “She was a little unconscious, but came to. We just kept talking to her.” 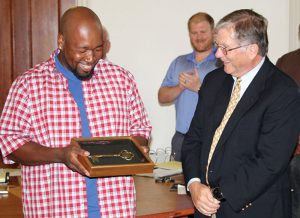 Demopolis Mayor John Laney presents Williams with a Key to the City.

During a Demopolis City Council meeting Thursday, Williams was honored for his actions and among those in attendance was Robert Wagstaff, brother of the victim.

“We are forever indebted to Mr. Williams,” Wagstaff said. “Octavia was underwater for about 15 seconds before he pulled her out.”

Wagstaff added that his sister, a resident of Newbern, suffered multiple injuries, including two broken ribs, a broken sternum and her right ankle, deep lacerations in multiple areas of her body, and has an eye infection from being under water.

“She is recovering and is undergoing rehabilitation,” he said.

“Today, people want to take their phones and video things, but Mr. Williams took action. He is a hero. He jumped into the water, putting his own life in danger, to save another life.” 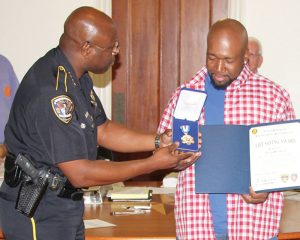 Police Chief Tommie Reese presents Williams with a Medal of Valor, the only one ever presented by the department, according to Reese.

Robert Wagstaff also presented Williams with a monetary gift on behalf of the entire Wagstaff family.

“My sister might not be with us today if it weren’t for the actions taken by Mr. Williams,” he said.

Also attending Thursday’s ceremony was Williams’ wife, Kala, and two of their children, Kennedy, 3, and Kendall, who is 4 months old.

After the events that afternoon at French Creek, Williams said he  got back in his truck and got back to work.

“You see a lot of scary things out there on the highway. I just take it day by day,” Williams said.

(This article original published in the Saturday, August 19, print edition of the Demopolis Times.)