Demopolis back on track with shutout 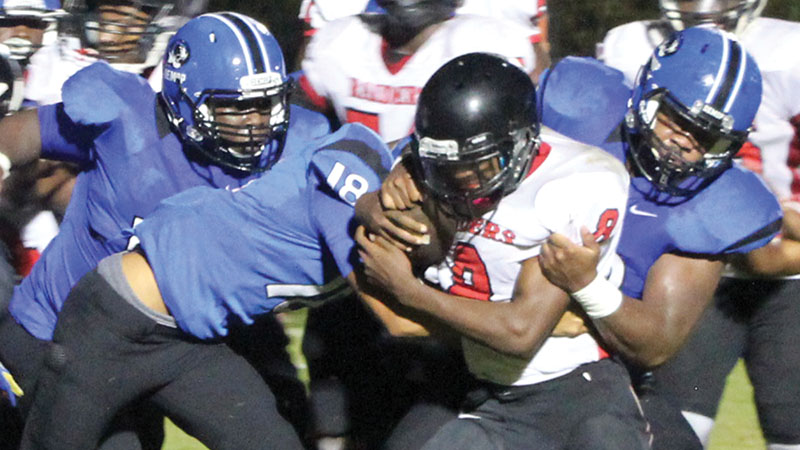 Demopolis defender Rodrick Gaines and other Tiger defenders hold the Raiders on fourth and goal from the 1-yard line in the third period to help preserve a shutout.

The home crowd saw the new-look Demopolis Tigers’ balanced offense, which combined with a stingy defense, dealt the Greensboro Raiders a 34-0  shutout and the school’s first win under head coach Brian Seymore.

The Tigers outpaced the Raiders, collecting 458 total yards to Greensboro’s 75.

The home crowd also got its first look at Seymore’s passing offense as quarterback Andrew Patterson went 14 of 26 for a total of 194 yards.

After last week’s opening loss to Thomasville, Seymore said he’s proud of how his players stepped up in preparing for Greensboro.

“We had a good week of practice, our coaches challenged the players and we saw some of our leaders step up,” Seymore said. “We saw players do a lot more of the little things right tonight. We do have to keep getting better, but I think we made positive strides from last week to this week.”

After giving up 29 points to Thomasville, the coach said he was pleased to see an improved defensive effort, including two interceptions by C.J. Williams and another by Chance McVay.

“We challenged the receivers a lot more tonight and we had key stops on the goal line,” he said. “We saw a lot of improvement in a short amount of time.

“It feels good to get that first win and I’m especially excited for our kids who have worked so hard.”

The Tigers got things going early offensively. After a short kickoff to start the game, Demopolis leaned on senior runningback A.J. Jackson for the early carries, including a big 23-yard gain. A few plays later, senior quarterback Andrew Patterson hit Demetrius Davis out of the backfield who scrambled 31 yards for the touchdown.

Demopolis would score again on its second position when Antonio Besteder scrambled his way 18 yards with 3:36 to go in the first. The point-after was no good, making the score 13-0.

The Greensboro defense held Demopolis early in the third, but a good punt by Patterson was downed at the 2-yard line. While the Raiders did get a first down, they were forced to punt on fourth-and-five.

With the offense taking control at their own 38, Tyler Jones got a quick first down on a 10-yard urn and Jackson followed with a few carries taking the ball to the 34. Patterson then hit Jackson on a screen play that led to 33 yards down to the 1-yard line. On the next play, the ball was fumbled into the endzone and recovered by the offense for the touchdown. The point-after made the score 20-0.

Demopolis would increase its lead with a drive that capped off with a touchdown with only 2 second left in the half. Patterson found Jeremy Jackson for a 24 yard gain early in the drive and later found Davian Williams for another 22 yards. The drive was capped with a 2-yard run by Besteder.

The final score came with 47 seconds to go in the third when A.J. Jackson went over the top of the line from one yard out, giving the Tigers the 34-0 victory and its first win of the 2017 season.

The Tigers will be back at home again next week to take on Tuscaloosa-Central in the first region game of the season. Kickoff is 7 p.m.