Tigers down Falcons for region victory 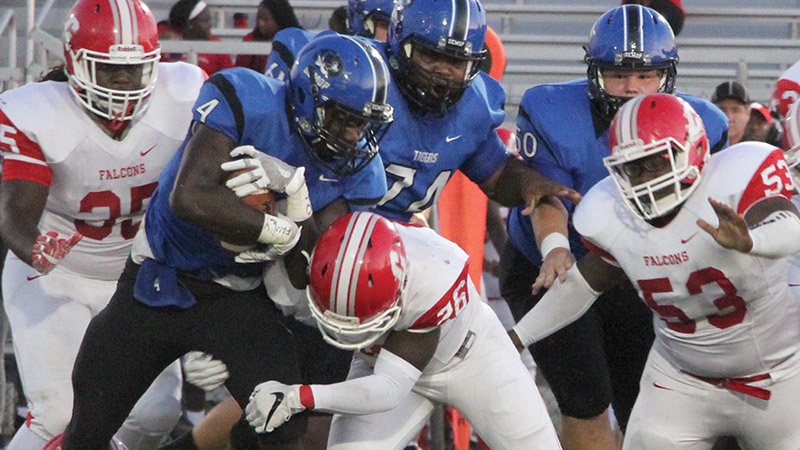 A.J. Jackson picks up tough yardage early against Central-Tuscaloosa. Jackson would close out this drive with a 6-yard touchdown run to give the Tigers a 6-0 lead.

After giving up a touchdown on its first defensive series of the game, the Demopolis Tigers held the Central-Tuscaloosa Falcons scoreless the remainder of the way leading to a 47-6 victory at home.

The Tigers got things started with a steady diet of hard-nosed running by A.J. Jackson and A.J. Besteder. The duo led the Tigers downfield leading to a 24-yard pass from Andrew Patterson to Brandon Simmons to set Demopolis up at the 8-yard line. Two plays later it was Jackson who got the call, carrying the ball into the endzone from six yards out. A fake point-after attempt failed as Demopolis took the early 6-0 lead.

The Falcons showed a spark early in the game with a perfectly thrown deep pass went 38 yards to tie the game at six. The score remained tied when Thomas Logan blocked the PAT attempt.

After a nice return to midfield by Dede Davis, it was Besteder who burst across the line of scrimmage for a big 31-yard gain to the 20. A few plays later Besteder got the call from the 8 and went untouched up the middle and into the endzone. Matthew Foxhall’s PAT was good, lifting the Tigers to a 13-6 edge.

The Falcons next drive came down to a fourth-and-1 and the Tigers snuffed out a fake punt attempt with Logan once again making a big play to stop the ballcarrier short of the first down marker.

With a short field, the Tigers would close out the first quarter with a 34-yard touchdown pass from Patterson to Tyler Jones. A 2-point attempt failed, making the score 19-6.

The Tiger defense once again forced a punt from the Falcons and the Tigers once again proved the could move the ball on the opposing defense. Using the same formula — mixing runs between Jackson and Besteder — the Tigers moved the ball to the 23-yard line. From there, Patterson found Davis who ran into the endzone. Foxhall’s PAT was good, giving DHS a 26-6 lead.

On the kickoff, the Tigers  caught the Falcons off guard with an onside kick that was recovered by Chance McVay. That drive would stall as would the next Tiger series.

The Tigers would take advantage of the next Falcon mistake which came when a high snap over the quarterbacks head was recovered by Aaron Collier. A few plays later Jackson would carry the ball in on a 4-yard touchdown run. Foxhall’s PAT made the score 33-6 at the half.

After a three-and-out by the defense to start the second half, the Tigers’ offense marched kept its foot on the pedal with an 80-yard drive, highlighted by a 27-yard run by Jackson that saw him break multiple tackles. Jackson would get the call from the 4-yard line and take it in for the score. Foxhall’s PAT was good for a 40-6 lead.

Demopolis would score the final touchdown of the game on its next drive. Again, the big play was Patterson finding Davis open for a 32-yard gain. This time, it was Besteder who got the call to finish the drive, running the ball in from six yards out. Foxhall’s PAT was good giving Demopolis the 47-6 region victory.

Demopolis travels to Marbury next week for another region contest. The Tigers will return home on Sept. 22 for homecoming against Calera.

(This article originally appeared in the Saturday, Sept. 9, print edition of the Demopolis Times.)