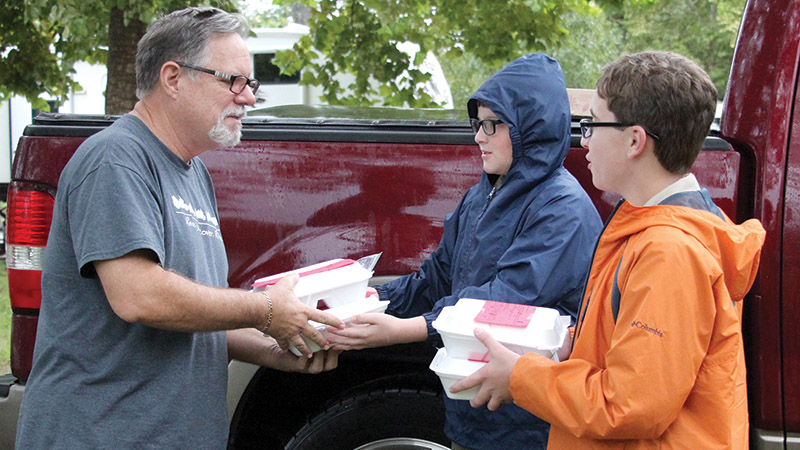 Ben and Jim Lindsey, members of Boy Scout Troop 41, deliver meals prepared by the First United Methodist Church to Pete Hughes of Jacksonville, Florida. The Hughes family evacuated their home on Thursday, ending up at Foscue Park in Demopolis.

Warnings of the dangers being brought to Florida by Hurricane Irma led to a mass evacuation and some of those evacuees landed in Demopolis where they found shelter from the storm and people ready to make them feel at home.

Evacuees filled many hotel rooms throughout the city while others set up campers and RVs at Foscue Park. Demopolis turned out to be an ideal location as Irma had weakened this far northwest of the storm causing only a wind advisory much of Monday as well as rain and colder temperatures. Governor Kay Ivey declared a state of emergency for Alabama ahead of Irma leading many area schools, including Demopolis, Linden, and Marengo Academy, to close for the day.

Many of the evacuees began to arrive in the area on Friday and the flow continued throughout the weekend. 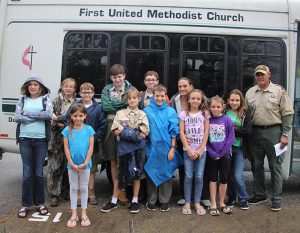 Boy Scouts with a group from Ft. Meyers, Florida, including Gary and Sonya Mikolajski and their family Jordan, Kierston, Samantha, Riley Mikolajski and Reese Johnson.

“We probably have about 45 to 50 evacuees,” said Jay Shows of Two Rivers Best Western. “We were close to full already due to a lot of construction projects, but we were able to accommodate many of those evacuating the Gulf Coast.”

Other hotels across Demopolis also served as temporary homes for evacuees as did Foscue Park, which was filled to capacity, according to Corps of Engineers staff. Evacuees were utilizing over half of the Foscue campground and officials said some people who had reservations gave up their sites to provide additional evacuees a place to stay.

“We are always full, but it was a different capacity this weekend,” officials said.

Once Foscue Park was filled to capacity, officials there pointed evacuees to other Corps of Engineers parks to the north.

“Our volunteer hosts have had a very busy week, taking phone calls and answering questions. They handled it well and were happy that they could be helpful to those who were displaced by the hurricane,” officials said.

One of those who found refuge at Foscue was Pete Hughes of Jacksonville, Florida.

“We picked up our grandchildren on Thursday and we have been traveling west ever since,” Hughes said. “We stopped several places along the way that we thought would be good, but the storm kept shifting west. Ultimately we found this place, which is a great RV park.” 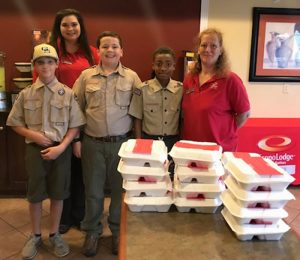 Hughes, along with his wife, Donna, and his two grandchildren, ages 9 and 4, planned to begin trekking back to Jacksonville Tuesday.

Sonya Mikolajski traveled from Ft. Myers, spending a few days in Montgomery before moving further west to Demopolis with a group of seven people, including her husband Gary.

They planned to remain at Foscue until Wednesday to give more time for roads to open in her area.

“It doesn’t sound very good (at home). The power is out, food is limited, and many of the roads are closed due to trees being down. All we’ve heard about our house is that our mailbox is damaged, so if that’s it we consider ourselves very lucky,” Mikolajski said.

Once word began to spread that evacuees were arriving, some began efforts to make their stay more comfortable. Bethel Baptist Church provided care packages and the First United Methodist Church and Boy Scout Troop 41 teamed up to deliver meals on Monday.

According to those involved, an estimated 175 meals were delivered to Foscue Park, Best Western, Econo Lodge, and Comfort Inn. 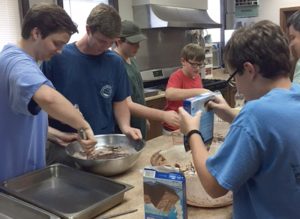 Boy Scouts were busy Sunday evening baking brownies for meals that were delivered to evacuees Monday. Members of the First United Methodist Church cooked the remainder of the meals.

“One of our scout mothers met a family of evacuees Saturday morning and was moved to do something. We thought providing meals would be a hospitable thing to do. Austin Lindsey began working with the First United Methodist Church to get the meals done,” said Troop 41 Leader Pat Smith.

Scout members gathered Sunday to bake brownies while on Monday members of the FUMC staff cooked the meals that were delivered beginning at 5 p.m.

“(The scouts) were very excited to help and I was impressed with their attitude,” Smith said. “They jumped right in, had a good time working together, and enjoyed providing the community service. Of course, the FUMC staff put a lot of work into it. We couldn’t have done it without them.”

The scouts received warm welcomes during the delivery.

“Those receiving the meals told us numerous times how much they appreciated it … you could tell it meant a lot to them,” Smith added.

“This is really, really nice … we’ve been eating sandwiches for a couple of days now,” Mikolajski said upon delivery of the meals to her family.

(This article originally appeared in the Wednesday, Sept. 13, print edition of the Demopolis Times.)