A cooperative effort of law enforcement agencies  led to the arrest Wednesday of a suspect wanted for murder charges in St. Louis, Missouri.

According to the Greene County Sheriff’s Office, Andre Lemoyne Williams, 32, of St. Louis, was found in Boligee. Williams was wanted by the St. Louis Metropolitan Police Department for first degree murder and a parole violation in which there was a $1 million cash bond. 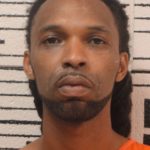 Andre Lemoyne Williams was arrested in Greene County. He was being sought in connection with a murder in St. Louis.

Williams is charged in St. Louis with first-degree murder and armed criminal action in the August 31 shooting death of 34-year-old Eugene Roberts, according to the St. Louis Post-Dispatch.

Williams was apprehended at 7:30 p.m. by the Greene County Sheriff’s Office with assistance from the 17th Judicial Circuit Drug Task Force and the Eutaw Police Department. Greene County officials said St. Louis investigators had asked for help  in locating Williams, who they believed was in the Boligee area.

As of Thursday, Williams was being held at the Greene County Jail awaiting extradition.

“We would like to thank all of the agencies that assisted us with this apprehension including the Tuscaloosa County Sheriff’s Office Aviation Unit. This is a prime example of what can be achieved when we all work together as one,” said GCSO Chief Deputy Jeremy Rancher.