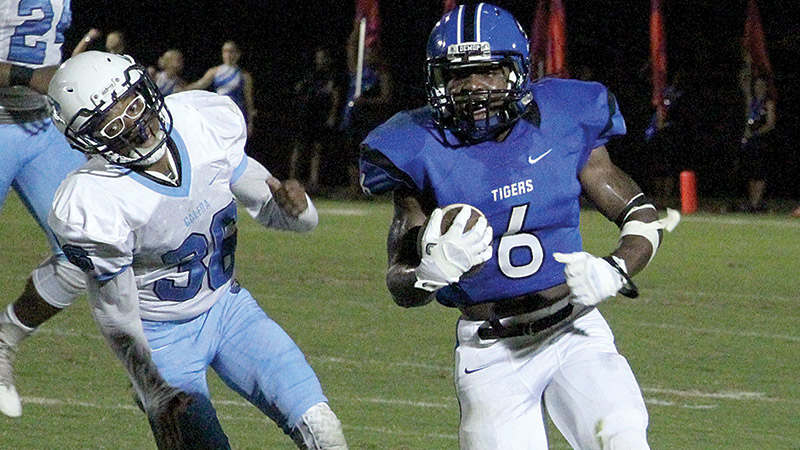 A.J. Besteder gets around the end for some running room against the Calera Eagles. Besteder finished the night with 90 rushing yards.

The Demopolis Tigers and Calera Eagles clawed and scratched throughout the night Friday, but it was DHS that managed to preserve the victory when sophomore D’Arius Williams hauled in an interception in the endzone with only seconds left on the clock.

While Demopolis took its shots down the field, it was the running game that provided their biggest successes. A.J. Jackson and A.J. Besteder combined for 200 total rushing yards, with Jackson taking the lead with 110 yards and two touchdowns on the night.

DHS quarterback Andrew Patterson came within fingertips of connecting on some long passes, but in the end went 10-of-22 for 125 total yards.

On the other side, the DHS defense held the Eagles to only 38 yards on the ground. Quarterback Quad Brown helped keep Calera close throughout with some key plays, going 17-of-31 for 173 yards and two touchdowns.

Demopolis outpaced the Eagles 326 to 211 in total yards on the night.

The Tigers did have a few mistakes on the night that played to the Eagles’ advantage, including a fumbled option pitchback that was scooped up by Jermaine Wilson and hauled about 65  yards for a touchdown, giving Calera a 7-0 edge.

The Tigers appeared to get their footing on their next possession. Patterson hit Jeremy Jackson for a 13-yard gain on a third-and-eight play and a few plays later De De Jackson hauled in a 12-yard reception. After a steady diet of the Besteder and Jackson, the drive was capped off with a 13-yard pass from Patterson to Jeremy Jackson. An airhorn blew the concentration of Matthew Foxhall’s PAT attempt, allowing Calera to hold on to a 7-6 lead early in the second.

Calera’s next possession was over quick when on the second play Thomas Logan hauled in the first interception of the night for Demopolis.

Winding down the half, Calara found some success through the air, marching down field to kick a field goal with .2 seconds on the clock, leading to a halftime score of 14-10.

In DHS’s first possession Patterson made key passes to Simmons and Davis, but it was Jackson who extended the Tiger lead on a 12-yard run, making the score, 21-10 midway through the third.

Calera struck back with Brown hitting Derrick Edwards for a 16-yard touchdown and cutting the lead back to four, 21-17.

Late in the fourth, Demopolis managed to move the ball downfield, but the drive stalled at midfield with 1:18 to go.

With one last chance for Calera to take the lead, Brown hit several receivers getting as far as the 30, but with time running out, a pass into the endzone was picked off by Williams to seal the 21-17 victory.

Demopolis has a bye week before taking on Sumter Central at the University of West Alabama on Friday, Oct. 6.

(This article originally published in the Saturday, Sept. 23, print edition of the Demopolis Times.)