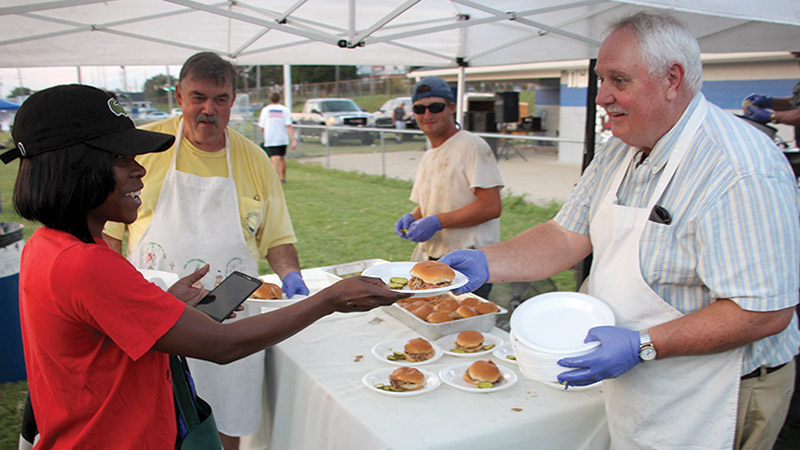 National Night Out brings together public safety officials and others in the community to help build a bridge between law enforcement and the public its serves. Among those volunteering for the Demopolis event was Mike Walters of Larry Walters Furniture and Tommy Cristwell of Lily White Cleaners who hands Glenda Atkins a barbecue plate at the middle school athletic field Tuesday night.

The Demopolis Public Safety Department welcomed the community to a night of fun, food and friendship Tuesday night when officials joined in the annual “National Night Out” campaign.

National Night Out is an annual community-building campaign that promotes police-community partnerships while enhancing the relationship between neighbors and law enforcement. While the police department takes the lead in organizing the event, other city departments also participate, including members of the fire department. 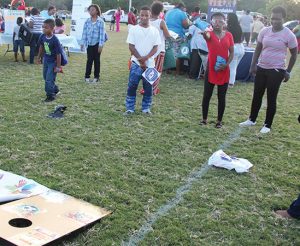 Traqueshia Vaughn participates in a rigged game of cornhole at National Night Out. The goggles she is wearing simulates what it is like when blood-alcohol level is between .12 to .15.

“It gave people an opportunity to get out, have fun together and meet their neighbors,” Reese said. “It was well attended and everyone I spoke to said they had a really good time.”

Reese added that the first responders enjoy the opportunity to speak with residents in a relaxed atmosphere.

“This is their chance to get out in the community and talk to people. Usually when they are out, they are working responding to calls, so there’s not a lot of time for them to mingle with people. This gives them the opportunity to talk about what they do and get to know people better,” Reese said.

The event drew a big crowd and there were many volunteers on hand  to help as well as special exhibitions by a wide array of organizations.

“I have to thank all the first responders who came along as well as those who donated items and came out to volunteer their time. That is what National Night Out is all about … working together as a community to make things happen,” Reese said.

Providing assistance as volunteers at the event were the Demopolis Citizens Police Academy Alumni and Boy Scout Troop 41.

(This article originally appeared in the Saturday, Sept. 23, print edition of the Demopolis Times.)