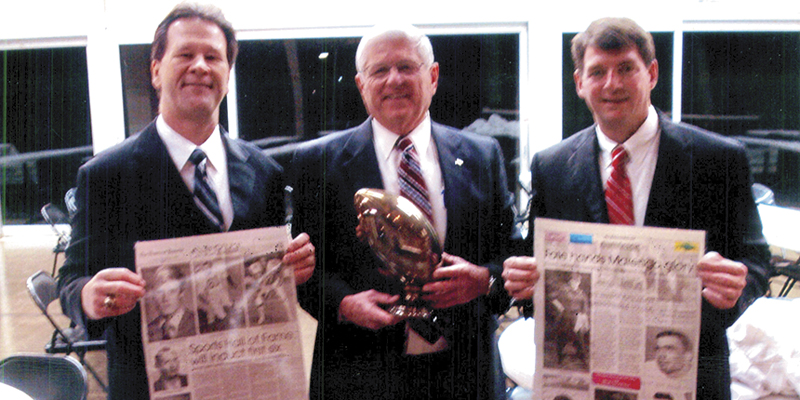 Pictured are the co-founders of the Marengo County Sports Hall of Fame, from left, Johnny Brooker, Tom Boggs, and Tony Speegle. This photo was taken at the 2009 MCSHOF Induction Ceremony.

In the summer of 2007, Tom Boggs, Tony Speegle, and Johnny Brooker met to discuss how to recognize and publicize the tremendous sports history of Marengo County with emphasis on recognizing individuals, teams, and how to exhibit memorabilia concerning events, teams and individuals.

The Marengo County Sports Hall of Fame was born from those first meetings and on Nov. 27, 2007, the corporation was officially organized and filed with the Probate Office of Marengo County, subsequently receiving tax exempt status as a non-profit organization.

The goals were set to select individuals who have made an impact on Marengo County through their talents in sports over the years, to host an annual induction ceremony, to recognize championship teams, to award an annual scholarship to a high school senior, and to provide a place for Marengo County sports memorabilia, so as to instill pride throughout the county.

A 12-member board of directors was organized and on Monday, Feb. 2, 2009, the first banquet and induction ceremony was held at the Demopolis Civic Center with a sold-out crowd.

There were six inductees the first year, and while all six of those individuals excelled in football, the following eight banquets have featured men and women covering not only football, but basketball, baseball, softball, track, boxing, wrestling, and even umpiring.

The 10th Annual Banquet and Induction Ceremony is planned for the second Monday of February, 2018 at the Demopolis Civic Center. The board voted to move the start time to 6 p.m. rather than the usual 7 p.m., with a gathering period at 5:30 p.m. Tickets will be made available starting in December with the price for the night’s entertainment and meal remaining at $25 each.

There will be a special emphasis on encouraging past inductees to be present for this 10th anniversary, and there will be a souvenir program featuring not only the new inductees, but all 46 of the past Hall of Fame members.

There is still time for submission  of nomination packages that should be delivered to Tom Boggs or Tony Speegle. The package should include a picture, letter of recommendation, and a vita sheet setting out information about the family of the nominee as well as a summary of athletic accomplishments.

The memorabilia collected for the last 10 years is exhibited by courtesy of the Demopolis Library Board in a back room at the Demopolis Public Library and the public is encouraged to visit those exhibits to share in the pride of the county.

(This article originally published in the Wednesday, Sept. 27, print edition of the Demopolis Times.)