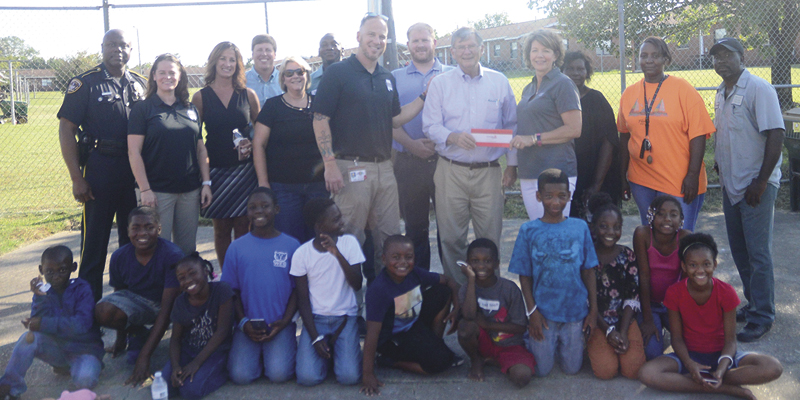 The Housing Authority held a check-receiving ceremony to commemorate a new basketball goal being erected. The ceremony included officials with the city of Demopolis, the Governor’s Commission on Physical Fitness and Alabama Power.

The State of Alabama’s Governor’s Commission on Physical Fitness and Sports and Alabama Power partnered together to buy a new basketball goal for the Demopolis City Housing Authority and the children living in the area. The donation was commemorated on Tuesday, Sept. 26 with a check-receiving ceremony.

Bobby Humphrey, chairman of the Governor’s Commission on Physical Fitness and Sports and former University of Alabama and NFL runningback, delivered a motivational speech at the Housing Authority recently and afterward a partnership formed when he and Demopolis Mayor John Laney discussed the lack of safe, recreational options for younger children in the housing community.

“Providing opportunities for our youth to play sports and be active in every community across the State of Alabama is essential to our mission at the Governor’s Commission on Physical Fitness and Sports,” Humphrey said. “We’re thrilled to follow through on our promise and dedicate a brand new industrial basketball goal to be enjoyed by the children of this community for years to come.” 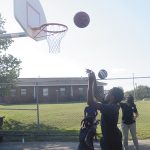 Children take some shots Tuesday at a new basketball goal installed at the Demopolis Housing Authority.

“We’re very thankful here in the city of Demopolis for the help Mr. Humphrey gave us … it’s a great thing for the children in the community because they had been without a basketball goal,” Laney said.

“It’s always great to see the smiles of young children getting the opportunity to play sports,” said Phil Holmes, executive director of the commission. “Our staff enjoyed spending time with these children and the leaders of Demopolis. It’s obvious they are very proud of their community and we, along with Alabama Power, were so happy to be a part of providing this opportunity.”

The children living in the area had been without a goal for about a year following the destruction of the previous goal and were ecstatic about the new basketball goal.

“It’s fun and you get to enjoy yourself and get all the energy out of you,” said Chylonn Spencer, who lives in the area and stopped playing basketball long enough for the ceremony to take place.

District 3 Councilman Harris Nelson said, “I appreciate all involved in getting this basketball goal bought and placed and hopefully the kids will be able to put it to good use and, judging by their smiles, I think they’re already happy with it.”

Following the ceremony, children began trying out the new goal.

“I’m really happy we got a new goal,” said Jayden Smith, who said he has been playing basketball since he was 5 years old.

Established in 1967 by the Legislature (Acts 1967, No. 215, P.580), the Governor’s Commission on Physical Fitness and Sports protects, promotes and improves the physical fitness of the residents of Alabama. It is one of the agencies responsible for performing the stewardship functions of Alabama government.

Since its creation in 1989 with funds donated by shareholders, the Alabama Power Foundation has supported Alabama communities, educational institutions and nonprofits with nonratepayer dollars through more than 20,000 grant and scholarship awards.