An early-morning armed robbery Thursday at a Demopolis gas station led to a manhunt that ended in Hale County with the arrest of two men.

Upon capture, Durwood McAlpine, 25, and Demondte Pernell, 23, both of Greensboro, were each charged with one count of first degree robbery.

The Demopolis Police Department responded to the Sunoco gas station on Hwy. 80 West upon receiving a call of the armed robbery at approximately 6:45 a.m. 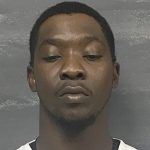 According to Demopolis Director of Public Safety and Police Chief Tommie Reese, officers at the scene were told a black male wearing a mask entered the service station armed with a handgun and demanded money from the cashier.

After taking the money, the robber made the cashier sit on the floor and then fled in a vehicle traveling east on Hwy. 80, according to police. 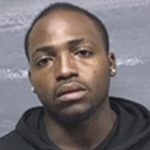 “DPD officers were able to get a vehicle description from video footage and from the cashier,” Reese said. “It was determined that the suspects fled in a maroon-colored compact car with a light-colored hood, and the vehicle’s tag number started with the number 36,” Reese said.

The DPD put out a Be-On-Look-Out (BOLO) for the vehicle and suspects to all neighboring law enforcement agencies. About 20 minutes after putting out the BOLO, the Greensboro Police Department, assisted by the Hale County Sheriff’s Office, located the vehicle driving through the intersection of Alabama Hwy. 25 and Alabama Hwy. 69.

Law enforcement officials conducted a traffic stop and the suspects were detained for the DPD. Dempolis investigators traveled to Greensboro to meet with Greensboro officers on the traffic stop.

“Investigators determined that these were the suspects involved in the armed robbery through evidence recovered in the vehicle. Both suspects were transported back to Demopolis where they were charged with first degree robbery,” Reese said.

The police chief added that the arrests were made possible through the communication and cooperation of neighboring law enforcement offices.

“We are all very thankful the cashier was not injured in this ordeal. I want thank and commend Greensboro Police Chief Mike Hamilton and Hale County Sheriff Kenneth Ellis for the assistance their departments provided. I also want to commend DPD officers and investigators for a job well done,” Reese said.

(This article originally appeared in the Saturday, Sept. 30, print edition of the Demopolis Times.)