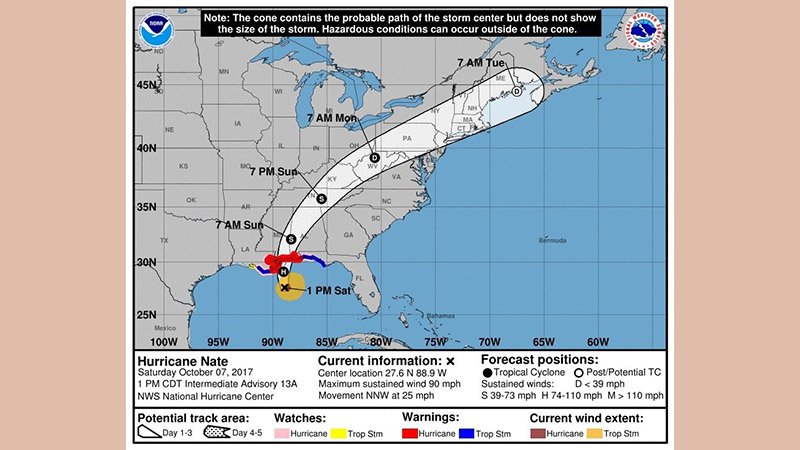 Hurricane Nate is expected to make landfall on the northern Gulf Coast area between New Orleans and Mobile as a Category 2 storm this evening with a northeastern path that would bring rain and heavy winds through the West Alabama area.

The hurricane is forecast to bring heavy rainfall of 3 to 6 inches with isolated totals of 10 inches east of the Mississippi River from the central Gulf Coast into areas of Mississippi, Alabama and into the eastern Tennessee Valley, and southern Appalachians through Monday, resulting in the potential for flash flooding in these areas. The hurricane’s fast forward speed after landfall will bring tropical-storm-force winds well inland across portions of the southeastern U.S., with the strongest winds expected to occur primarily to the east of the center, according to the National Weather Service.

For the area of Marengo County, a Tropical Storm Watch is in effect with 35 to 45 mph winds and gusts of 60 to 70 mph possible, according to the NWS. These winds are expected to begin early Sunday morning and continue to Sunday afternoon.

There is a significant threat of downed trees and power lines across the area. Three to five inches of rain is possible across central Alabama, beginning Saturday night and continuing into Monday.

In advance of the storm, FEMA liaison officers are deployed to emergency operations center in Florida, Louisiana, Mississippi, Alabama, and Georgia to help coordinate any requests for federal assistance