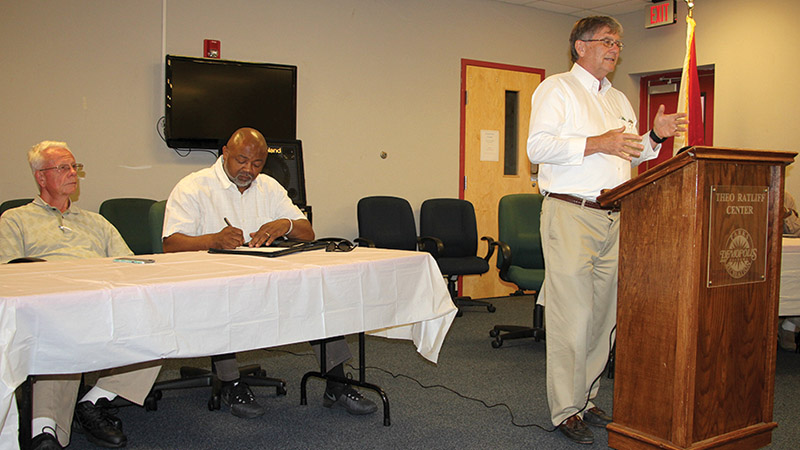 Demopolis Mayor John Laney, along with members of the city council, held a series of town hall style district meetings aimed at providing residents with information and to receive feedback from the public.

Laney opened the meetings by providing an update of some of the recent actions by the city as well as a few items that are being considered for the future.

Among the items the mayor addressed was the city’s consideration of possibly closing Fire Station No. 2 in downtown Demopolis and possibly using that facility for an ambulance service.

When asked about the issue during a council meeting Thursday, the mayor said the city is still in the early stages of that process and that it would take at least 12 months to establish the service.

The mayor also spoke about increasing transparency by publishing the city’s financials and council meeting minutes on the internet, also stating that the city’s website is currently being updated.

He also addressed changes made to city departments, combining police and fire into a Department of Public Safety headed by Police Chief Tommie Reese as well as combining horticulture with public works, headed by Barbara Blevins.

“These changes will allow us to do more with the same number of people. Under public works we have five teams with one team working in each district each day,” Laney said.

He also spoke about moving the Bigbee Humane Society from a location near the public works department to an area outside the city.

“The (original) site was miserable for the people who lived in that area and we were able to solve that problem,” the mayor said.

The mayor also touted accomplishments in the areas of dilapidated properties as well as the sell and anticipated improvements of the Rosenbush Warehouse.

Laney also addressed the work being done to improve the Brickyard drainage system and working with the Corps of Engineers and Rep. Terri Sewell’s office to improve a longstanding drainage issue on Decatur Street.

During each meeting, the public was given the opportunity to ask questions and make comments. There were concerns voiced on topics ranging from street improvements to the overgrown weeds and grass. “There are overgrown property on our street every year and we’ve been begging for it to be cut,” said Ernestine Mullen.

One item where citizens voiced opposing views regarded speed bumps. The city has placed speed bumps in areas where residents have complained about speeding vehicles, but some residents stated the bumps are a hindrance and damage vehicles.

(This article originally appeared in the Saturday, Oct. 7, print edition of the Demopolis Times.)