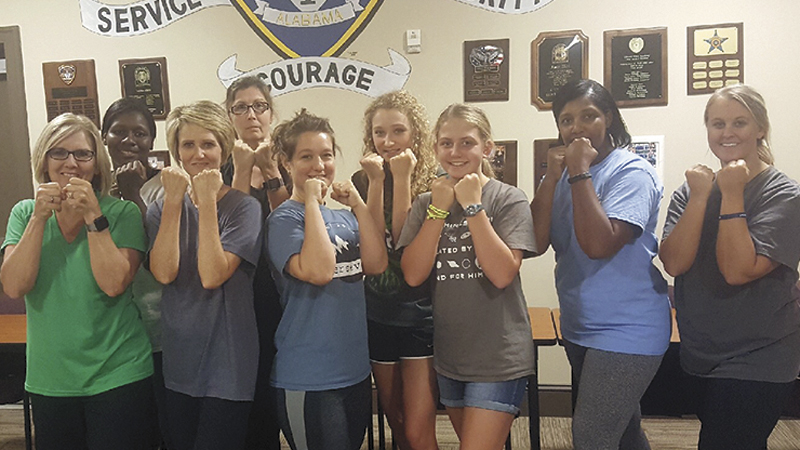 Pictured are participants in a recent Equalizer Women’s Self Defense class held at the Demopolis Police Department in August and September. The participants learned various self defense tactics as well as recognizing and avoiding dangerous situations and the proper time to use force against a potential aggressor.

The Demopolis Police Department held the Equalizer Women’s Self Defense course on Aug. 31, Sept. 14 and Sept. 28. The course consisted of three separate classes meant to teach women how to survive and escape physically violent situations and was held at the DPD Training Center.

Each class lasted from 5:30-8:30 p.m. and was open to all females ages 13 years and older. Students had to attend all three classes in order to receive a diploma and become certified.

“We want to give women the opportunity to protect themselves if they are attacked,” said Tommie Reese, Director of Public Safety and Police Chief.

Women who took the course were educated about recognizing and avoiding dangerous situations, proper use-of-force and the law regarding it. They were also taught facts concerning and the effects of rape, sexual assault and stalking and what options they have if they or someone they know becomes a victim.

The majority of the class was hands-on, with participants practicing ways to protect themselves if they are attacked.

“[It’s a] great class for them to feel comfortable in themselves,” Reese said.

While the next self-defense course won’t be until next year, Reese said that a Civilian Firearms Familiarization Class will be offered on Nov. 4.

(This article originally appeared in the Wednesday, October 11th issue of the Demopolis Times)