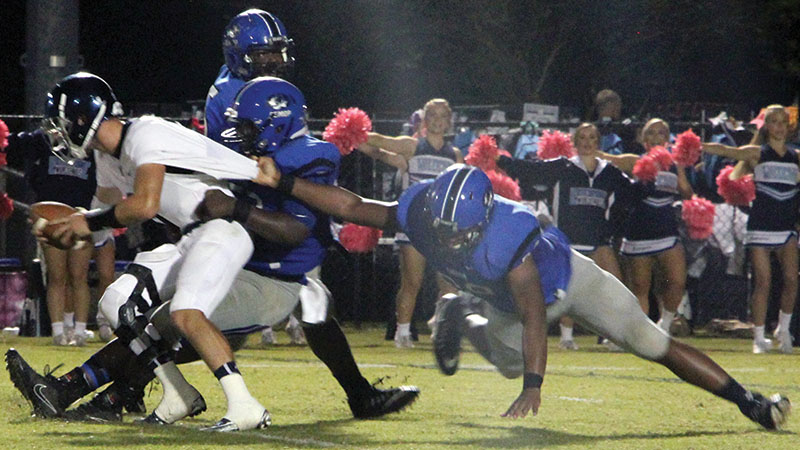 Frederick Haywood, Keionte Whitfield and Erin White get to the Enterprise quarterback for a sack in the third quarter.

After a tight first half, the Demopolis running attack and sound defense proved too much for the 7A Enterprise Wildcats as the Tigers sent them packing, 33-7.

The Tigers’ two A.J.’s — Besteder and Jackson — continued to be workhorses and the two accounted for all five DHS touchdowns. A.J. Jackson rushed for 161 yards and two touchdowns while A.J. Besteder finished the night with 123 yard and three touchdowns.

Demopolis finished the night with 332 rushing yards and 439 total yards.

Quarterback Andrew Patterson went 9-of-13 passing for 107 yards. Dede Davis, Tyler Jones and Brandon Simmons were among his targets.

After a nice punt by Enterprise backed the Tigers up at the 6-yard line, Demopolis drove the ball 94 yards on a mix of Besteder and Jackson. It was Besteder who got finished the drive on a 10-yard run. A 2-point conversion failed.

Once again, things looked good for Enterprise after a punt that, this time, was downed at the 1. Consecutive passes to Jones and Davis got the Tigers some breathing room to the 35.  Besteder would break the drive open with a 35-yard run and drew a personal foul.  With 6:30 to go in the first half, Jackson found the endzone to make the score, 13-0.

The Wildcats did complete some passes on the night, especially in the first. One of those was a 25 yard gainer in the second quarter that led to a 2-yard run that cut the Tiger lead to 13-7.

Enterprise threatened again late the half, but a QB pressure by Frederick Haywood led to a missed field goal attempt.

The second half was all Demopolis. Besteder would score the next two touchdowns of the game on consecutive Tiger possessions, one a 6-yard and the second a 15, to make the score 27-7.

The defense smothered Enterprise through much of the second half. Down the stretch, both C.J. Williams and Roderick Gaines had interceptions. It was Besteder who put the nail in the coffin when on a fourth-and-two play he scampered 22 yards for his second touchdown of the game.

With the win, the Tigers are now 7-1 overall and 5-0 in region play. They will host Jemison next Friday night for the annual Senior Night.

(This article originally published in the Saturday, Oct. 21, print edition of the Demopolis Times.)