The Democratic candidate in the special election for U.S. Senator on Friday spoke before a group at the  Marengo County Courthouse.

Doug Jones, a former U.S. Attorney for the Northern District of Alabama, told those who gathered that now is the time for a new voice representing Alabama in Washington. 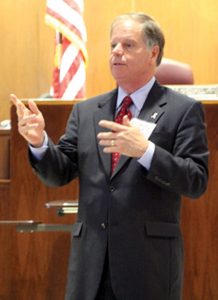 “This is an interesting time in Alabama. This is a time when we can change the divisiveness in Washington,” Jones said. “I want to use this election to bring people together … that is the most critical thing. Right now, we see nothing more than party-line votes. No one wants to reach out and form a consensus.”

Jones said he worked with Howell Heflin, Alabama’s last Democratic senator who retired from that seat in 1990 after serving 12 years. Richard Shelby was elected as a Democrat in 1987, but switched to the Republican Party in 1994.

“(Heflin) taught me how to listen and how to reach across the aisle and that’s what I want to bring back to Washington. You look at the success Mobile has had recently and you see what can happen when Democrats and Republicans work together,” he said.

The candidate spoke about the ongoing healthcare debate, stating that the Affordable Care Act was always intended to be a work in progress and that politics has plagued recent reform efforts.

“Bills are being presented with no input from anybody; that’s not the way Washington is supposed to work,” Jones said.

Jones said if elected he will be an advocate for more job training in rural areas like the Blackbelt, infrastructure as well as Medicaid and Medicare.

“We have got to have more industry across all of our state and training so our kids are prepared for the next generation of jobs,” Jones said.

“Our state is poor and unhealthy. We depend on Medicaid for our health needs and to keep our rural hospitals open.”

“I believe this is a critical time,” he said. “A Southern voice of reason is what is needed; to show we care about everyone. Alabama is not what we were 60 years ago; we have diverse communities that care for one another. If we don’t do something we could take a big step backwards. I want the rest of the country to see Alabama for who we really are.”

(This article originally appeared in the Saturday, Oct. 21, print edition of the Demopolis Times.)