The Demopolis High School JROTC program and Heart of Marengo Chamber of Commerce will hold Veterans Day events on Nov. 9 and Nov. 11, respectfully. The JROTC’s event will include a guest speaker, Posting the Colors and Recognition of Veterans. The chamber of commerce will hold its first annual Veterans Day Parade.

The Mighty Tiger Battalion at DHS will honor veterans on Nov. 9 from 9:46 to 10:46 a.m. at the high school’s gym with Phillip Spence, VFW Post Surgeon, as the guest speaker. 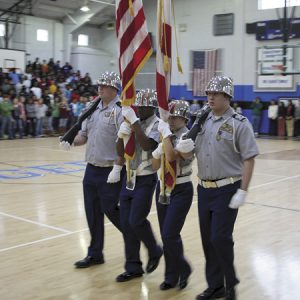 The Demopolis JROTC will host a Veterans Day program on Nov. 9 in the school’s gymnasium.

The program will include Posting the Colors, reciting the Cadet Creed, Recognition of Veterans, a special performance by the Demopolis Drill Team, Folding the Flag and more.

“Demopolis High School would like to recognize and pay our respects to the veterans,” Hearn said.

Also to honor the veterans, the first annual Heart of Marengo Chamber of Commerce Veterans Day Parade will take place on Nov. 11 at 10 a.m. in Linden. The parade will stretch from Scott Park through the downtown area.

Participants and floats will meet at 8:30 a.m. at Scott Park to line up. Those wishing to participate can pick up registration forms at J & K Whistle Stop Café and return them no later than Nov. 3. There are no guidelines for the floats.

“Whatever you can decorate and [will] make it up and down the road” is allowed in the parade, according to Kim King Duhe, co-chair of the parade.

They decided to host the parade in order to celebrate and honor the veterans and their service.

“We wanted to let them know we appreciate them,” Duhe said.

Heart of Marengo Chamber of Commerce is also planning a Veterans Hall of Fame and “thought this would be a great start,” according to Kathy Lewis, who is a member and helped plan the parade.

So far, the parade has “eight participants, not including cars,” Lewis said.

She also said that accommodations would be made for veterans wishing to participate in the parade.

(This article originally appeared in the Wednesday, October 25 edition of the Demopolis Times)