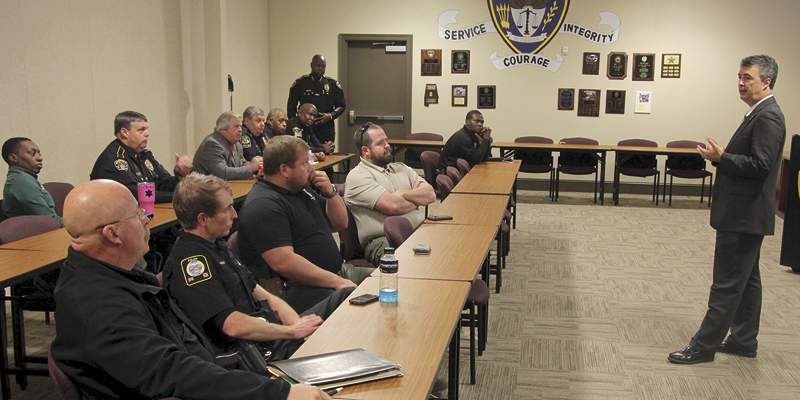 Alabama Attorney General Steve Marshall was in Demopolis Wednesday when he spoke before the Demopolis Rotary Club prior to visiting with area law enforcement officials at the Demopolis Police Department.

Marshall was appointed to the office of Attorney General by former Governor Robert Bentley upon the resignation of Luther Strange who had filled gone on to fill Jeff Sessions’ seat in Congress. 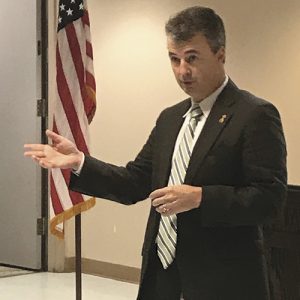 Marshall was also the guest speaker at a meeting of the Demopolis Rotary Club.

During his visit with the Rotary Club, Marshall spoke about his history in law enforcement and as the Marshall County District Attorney in north Alabama.

He also said serving as the state’s attorney general will be his last office as he does not intend to seek other political offices.

At the police department, Marshall praised law enforcement officials for their sacrifice and asked each one to speak about the criminal elements in their jurisdictions. The topics ranged from burglaries to drug activity and gang activity to theft of agricultural equipment.

“I want (law enforcement) to know that you have somebody in the attorney general’s office who will help you with your need and to advocate for you. We ask you to run into problems instead of running away. My greatest professional blessing is being able to work with you … you are all my heroes,” Marshall said.

Marshall also said it is important that public officials be held to a high standard and that he will work to prosecute those who violate ethics laws.

“It’s not the norm, but we have to be prepared (for those cases),” he said.

One of the biggest issues, he said, is dealing with the opiate problem that is affecting the entire state.

“We have to do a good job in Alabama dealing with this problem,” Marshall said.

The AG office is working to incorporate a state wiretap statute law to help fight the larger drug trafficking rings. He said currently local law enforcement is too dependent on federal agencies for those types of tools.

He is also working to incorporate a Computer Forensics Division within the state.

Following his visit with law enforcement officers, the Times asked Marshall about a request by the City of Demopolis for an AG opinion on the Confederate Memorial statue that was damaged in the summer of 2016. The city council had voted to repair the statue, but not to its original state. Shortly after that vote, the state adopted the Alabama Preservation Act, which prohibits the “relocation, removal, alteration, or other disturbance of any monument on public property that has been in place for 40 years or more.”

Marshall said an opinion has been written, but that it is currently in the review stage of the process.