A man was recently arrested and charged with attempted burglaries of convenience stores in Demopolis and Butler.

Jarvis DeQuaries Lewis, 23, of Dixons Mills was arrested and charged with the two burglaries after being apprehended in Butler, according to DPD officials. 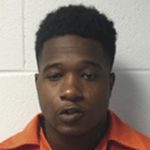 Local law enforcement responded to Parr’s Chevron on Hwy. 80 West at approximately 4 a.m. on Thursday, Oct. 12 where they discovered that a glass door had been shattered and another door completely knocked out. Officers obtained evidence at the scene indicating that the suspect was likely a male wearing a grey-hooded sweatshirt with writing on the front. It is believed he entered the store looking for cash and then fled the scene on foot.

Demopolis Director of Public Safety and Chief of Police Tommie Reese said DPD Investigators traveled to Butler where they interviewed Lewis and continued the investigation.

Lewis was arrested and is being held in the Choctaw County Jail on additional charges. Reese said it is believed he may be responsible for several more burglaries in different cities across West Alabama.

“We thank and appreciate the Butler Police Department and other agencies for their assistance with this case and the investigation,” Reese said.

(This article originally appeared in the Wednesday, November 1 edition of the Demopolis Times.)