The Demopolis Tigers celebrated its final home game of the regular season in style and secured a perfect region record with a victory over Jemison, 48-7.

The Tigers wasted little time showing Jemison what was in store — a heavy dose of A.J. Jackson who had 172 rushing yards and two touchdowns in the first half alone.

In all, DHS rushed for a total of 332 yards with another 176 yards through the air.

The defense held Jemison in check, giving up only 197 total yards, many of those coming late in the game.

Both Jackson and A.J. Besteder would hit the century mark on the ground. Jackson finished with 162 while Besteder had 103. Both finished with two touchdowns.

Senior Dede Davis also had a good night with 132 total yards and two touchdowns, coming as both a receiver and out of the backfield. 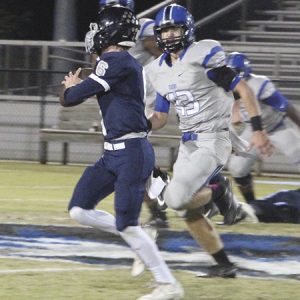 On the Tigers’ first series, Jackson had six carries for 54, which included runs of 18 and 12 yards, the later going into the endzone. A two-point conversion attempt was no good, leading to a 6-0 lead.

Demopolis would score again later in the first quarter, again being led by the running of Jackson who opened the series with a 9-yard gain. After a loss of 2, Jackson came back with a run for 13 yards. A.J. Besteder also got into the act, and had consecutive runs of eight yards the second of which went into the endzone. Malaki Simpson’s point-after lifted the Tigers to a 13-0 lead.

The Tiger defense was forced Jemison to punt, which was downed at the Tiger 12-yard line with .2 seconds on the clock. The handoff went to Jackson who burst through the line into open space and ran away from the defense for an 88-yard touchdown. Simpson’s PAT made the score 20-0 after one quarter.

Jemison had its biggest play of the game with what appeared to be a run that would set them up in the red zone, but the Tiger defense knocked the ball free and recovered at the 5-yard line. A few plays later, Andrew Patterson found fellow senior Dede Davis who took the ball 83 yards into the endzone. The point-after extended the lead to 27-0.

Demopolis would add one more score in the first half when Besteder took the ball to the zone from 24 yards out, making the halftime score 34-0.

The Tigers came out in the second half and started with consecutive runs by Besteder, totaling 20 yards. Patterson would then find another senior, Brandon Simmons, who took the ball 46 yards for the score. The point-after made the score 41-0.

Davis would add another score for the Tigers, this time out of the backfield, on a 19-yard run, lifting the Tigers to a 48-0 lead.

Jemison would find the endzone late in the fourth quarter, making the final 48-7.

The victory gives Demopolis an 8-1 record overall and 6-0 in region play. The Tigers secured the top seed in 5A Region 3 play two weeks ago and will host Williamson in the first round of the state playoffs. Before then, the Tigers will travel next week to Auburn High School for its final regular season game.

(This article originally appeared in the Saturday, October 28 edition of the Demopolis Times.)