Proud to be Drug Free 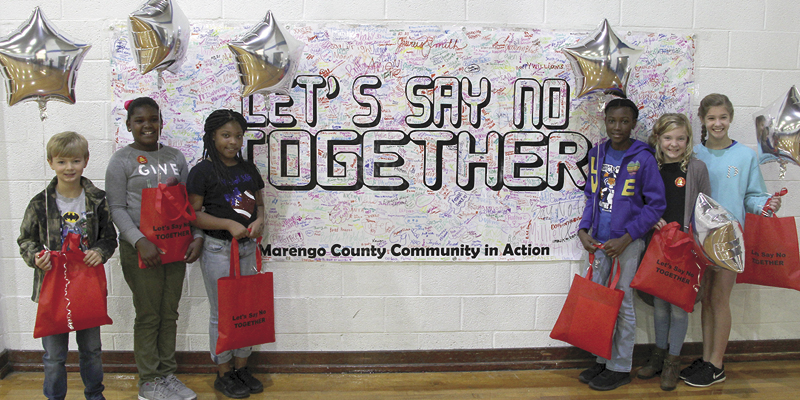 Among the many activities held at local schools during Red Ribbon Week was an essay contest. U.S. Jones Elementary winners of the contest are, from left, Lawson Boone, Paige Williams, Kelsey James, Sha’Kethia Murphy, Emery Wideman, and Lizzie Hathcock. The students are standing in front of a banner that traveled around the state, being signed by students who pledged to “Say No Together.”

Community in Action allied with Marengo County to host a banner-signing for eight schools and several different businesses and organizations during Marengo County’s Red Ribbon Week Celebration. Over 2,700 people signed the travel banner in support of the organization message that all drugs and underage drinking are bad.

The travel banner will be moved to a different participating school each month and every school will get its own permanent banner to constantly display. The schools that participated are Demopolis High, Demopolis Middle, US Jones, Westside Elementary, Linden High, George P. Austin, Sweetwater K-12 and Amelia Love Johnson K-12.

Latoya Witherspoon of the Coalition Coordinator for Community in Action said the organization “works to reduce underage drinking and drug use across the county” with a specific focus on students.

Several businesses, local organizations and law enforcement agencies have also signed the banner in support of Community in Actions statement about drugs and underage drinking.

“It’s not just the different schools we’re hoping to come together. We’d like to say ‘no’ together as a community,” Witherspoon said.

(This article originally appeared in the Wednesday, November 1 edition of the Demopolis Times.)