Reverend Williams was born Nov. 15, 1927, in Geiger, Alabama, to the late Elder James Williams and the late Anna Jones. He was the only child borne to this union until both parents divorced and remarried. He became a big brother to five siblings through the marriage of his father and Rosa Lee Johnson. 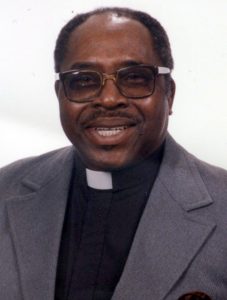 Reverend Williams married three times. His first marriage was to Annie Mae Ezell. Eight children were born to this union; second wife was Mary Earl O’Neal whose two children he helped to raise; and his third wife, Essie Adams, was a childhood sweetheart. They all preceded him in death.

Lonnie Williams attended George P. Austin High School in Linden. As a young man, he acquired many skills as a construction worker, Caterpillar machine operator, carpenter, concrete specialist, plumber, bricklayer, and a long distance truck driver. All skills proved to be extremely helpful later in his life when he started his own business, Williams Construction Company, from which he retired in 2003.

Lonnie Williams found his lifelong spiritual path when he accepted Jesus Christ as Lord and Savior at an early age and joined Franks Chapel AME Church located in the Collinsville community in Linden. He was ordained a deacon and served in many capacities. In 1960, he became the Reverend Lonnie Williams when he began his first pastoral appointment at Franks Chapel. His excellent leadership was rewarded by the Methodist Conference with the opportunity to head two churches: Bethel Rock AME Church in Demopolis and Coles Chapel in Marion, Alabama. He used his skills to improve the physical structures of both churches.

He was preceded in death by his parents; his three wives; and his brother, Charles “Sonny” (Dora) Williams.

Reverend Williams is survived by children from his first wife and stepchildren from his second wife. They are daughters, Lonnie (Dan) Locke of Olympia, Washington, Linda Johnson of Demopolis, Edna (Taha) Malik of Maywood, Illinois, Carolyn (Will Jr.) Moore of Demopolis, Barbara Forrester of Montgomery, and Marilyn  Wise of Forth Worth, Texas; sons, Alex James Williams of Demopolis, and Ronald Dean Williams of Birmingham; and stepchildren from second marriage, Deborah (Larry) Spicer and Larry O’Neal of Demopolis. He was affectionately called “Big Brother” by his sisters whom he loved dearly: Rosa (Willie) Watkins, Lucy Armstrong, Annie (Eric) Ware, all of Montgomery; and Barbara (Felix) Robinson of Houston, Texas. He also leaves to cherish his memories: a loving congregation at Coles’ Chapel of Marion; two devoted “surrogate” sons, Willie Ingram of Demopolis and Jeremiah Hoytte of Marion.