Tiger Arts Guild takes to stage for ‘The Lion, the Witch, and the Wardrobe’ 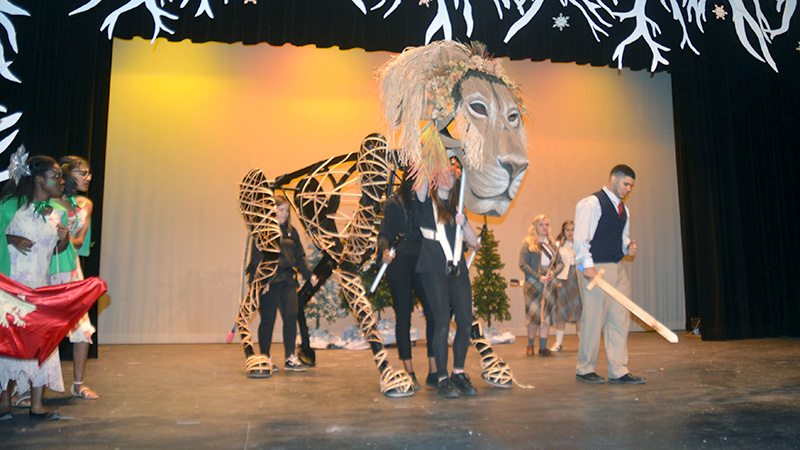 The Tiger Arts Guild constructed an 8-foot lion for the Aslan character as part of this weekend’s production of “The Lion, the Witch, and the Wardrobe.” The Guild, with funding assistance from the Webb Family Foundation, hired professional artist Garland Farwell to help with the construction of the lion, as well as other parts of the set.

Demopolis High School’s Tiger Arts Guild will be pulling the curtain on its production of “The Lion, the Witch, and the Wardrobe” at the DHS auditorium on Nov. 10 and 11 at 7 p.m. and on Nov. 12 at 2 p.m. On Saturday, there will be a preshow discussion on the book at 6:30 p.m. Tickets are available at the door for $6.

Seventy students, including cast, have been involved in producing the play. Work began as soon as students were cast in September. Students take on the majority of behind-the-scenes roles, including stage managing, costuming, light and sound, and the fly system.

Jody Tartt, who teaches theatre at DHS, directs and casts, but leaves the rest up to the students. She is not even backstage during the play, allowing the entire production to be student-driven.

“That is something that I’m really proud of when I look at our shows and see that the students have really done most of the work,” Tartt said.

Because the plays are student-driven, students like Layla Willoughby, who plans to become a stage manager or director, gets a taste of what the field is really like.

“I’ve always been interested in the arts, but I was never the greatest at drawing or painting. This is perfect for me because I get to express myself artistically without having to draw stuff out and perform like the other artists do,” Willoughby said.

Tartt began researching in April which play she wanted to produce for the fall semester. She looked for productions that have mass appeal and artistic value as well as plays that are familiar and light-hearted with some educational aspect before finally choosing “The Lion, the Witch, and the Wardrobe.”

“It’s a morality tale. There’s a lesson to be learned, especially with what happens with Edmund. He is a young man who makes a bad decision and is forgiven for it, and he makes a wrong right in the end. So I think that’s important. Forgiveness, redemption, being able to correct a mistake is a big theme in this play,” Tartt said.

Using a donation from the Webb Family Foundation and funds from the Tiger Arts Guild, Tartt hired Garland Farwell, a professional artist, to help build the set. Since Farwell specializes in creating puppets, a large portion of his time was put towards building an 8-foot Aslan lion puppet.

“I think (with Aslan) we’ve taken it to another level. Because we’re trying things that are really a lot more complex. Most of my massive puppets have been simple contraptions. This is multi-faceted with a lot of joints and a lot of things that have to be balanced, and we also have to get somewhat realistic movements. That was never a concern for other stuff,” Farwell said.

Tartt said she believes that all the effort the students have put in will impress the audience.

“I think that if they come to this show, they will be pleasantly surprised by what high school students are able to accomplish,” she said.

The wheelchair-accessible auditorium seats 443 people. Tartt recommends arriving early for seating. Those who need wheelchair assistance may call the school ahead of time for assistance.

(This article originally appeared in the Wednesday, Nov. 8, print edition of the Demopolis Times.)