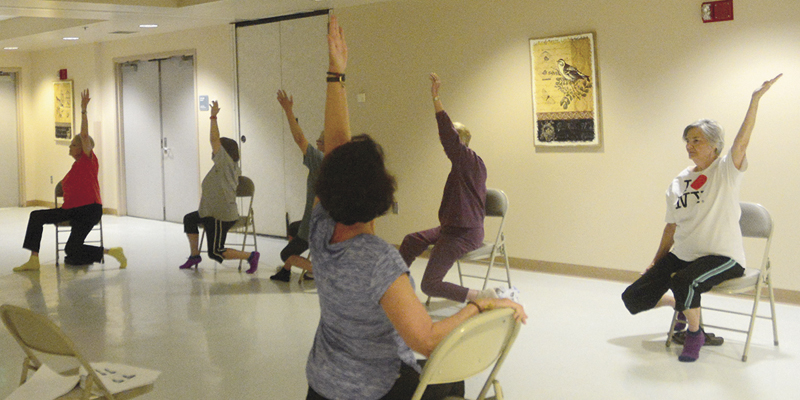 Members of a chair yoga class that is being offered at the Wellness Center at Bryan W. Whitfield Memorial Hospital.

Chair yoga is also offered for participants that cannot easily get up from the floor due to the effects of aging or disabilities. It is a gentle form of yoga practiced either while sitting in a chair or using a chair as support. The cost per class is $3, and it is offered on Wednesdays at 3:30 p.m.

According to Jackie Chauvin, the Wellness Center’s Personal Trainer and Yoga Instructor, some health benefits of yoga include improved lung capacity, increased flexibility, strength and endurance, decreased stress and a healthier heart.

“Yoga has been known to lower blood pressure and slow the heart rate. A slower heart rate can benefit people with hypertension, heart disease and stroke,” Chauvin said.

According to Anita Bonfili, who teaches the chair yoga classes, yoga has been incorporated into the army, NFL and Arthritis Association, while breathing techniques from yoga are used by the American Cancer Association and the American Heart Association. It is also part of P90X, an intense home-fitness exercise program.

Bonfili also said they teach the “international” or “traditional” style of yoga, meaning participants who have taken yoga classes elsewhere will already be familiar with the poses and breathing techniques taught during class.

Chauvin also described the style of yoga that they teach as “sustainable”, meaning it will be gentle and can be practiced for years to come.

“We had a lady that was 96 and she continued to come to class until two months before she passed away,” Chauvin said.

Among the other physical benefits, Chauvin and Bonfili said that practicing yoga can also help relieve pain.

“After being diagnosed with spinal stenosis and a herniated disc, I was encouraged by Jackie Chauvin to give yoga a try. Took a while, but the pain I was in convinced me to give it a chance. I’ve had great results and the pain is basically gone. I really believe that yoga has helped me avoid surgery,” said Keith Holley, who regularly attends Chauvin’s yoga classes.

(This article originally appeared in the Saturday, November 4 print edition of the Demopolis Times.)