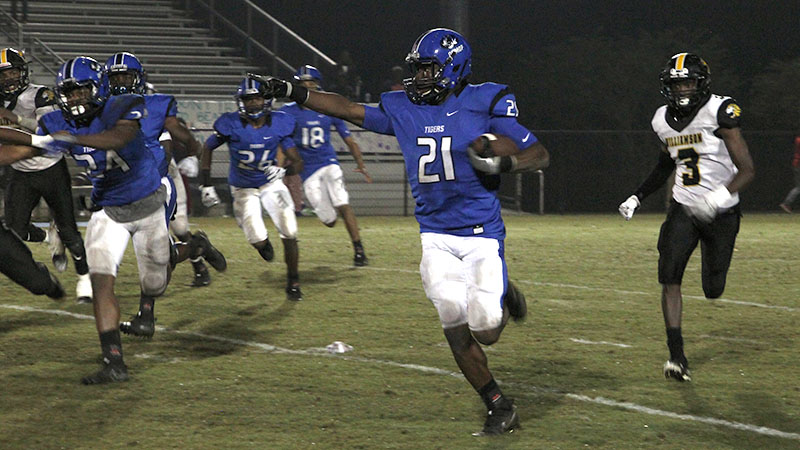 Aaron Collier looks for a block after intercepting a Williamson pass.

Defense ruled for both teams early on in Demopolis’ first-round state playoff contest against Williamson, but the Tiger running game started to find some room against the Lions in the second half, leading to a 21-0 shutout win.

A.J. Jackson who finished the night with 92 yards and two touchdowns led the Demopolis running game. A.J. Besteder also had a solid night, finishing with 73 yards.

Tigers’ quarterback Andrew Patterson finished the night 9-for-12 for 81 yards, including a 34-yard touchdown pass to Dede Davis, who finished with a total of 54 yards. 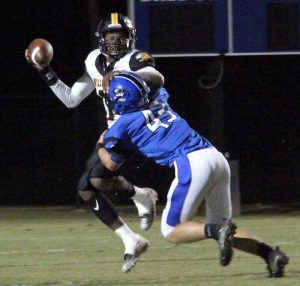 The Demopolis defense was solid all night, giving up only 117 total yards to the Lions.

The two teams exchanged punts through the first half. If facing the Tiger defense was not bad enough, the Lions also hurt themselves with penalties, having a total of 15 that cost them 85 yards through the course of the game.

The first half was definitely a defensive struggle as the Demopolis and Williamson finished the half with 59 and 58 total yards, respectively.

But, the Tigers got things going on their first possession of the second half. Jackson led the charge early in the drive, including having an 18-yard run to midfield. Later he would hit a hole for 18 more and into the endzone. Malaki Simpson’s point-after gave the Tigers a 7-0 lead.

Demopolis would increase its lead on the next possession, led downfield by Jackson and Besteder. It was Jackson again who got the call from four yards out, leading to a 14-0 lead early in the fourth.

The defense continued to punish the Lion offense down the stretch, including sacks by Thomas Logan, Fred Haywood and Tavian Brown.

An interception by Aaron Collier and returned the Lion 31-yard line, led to a 34-yard pass from Patterson to Davis to put the game away for the Tigers.

Demopolis will again play host in the second round on Friday, Nov. 17, when they will take on Clay-Central.

(This article originally appeared in the Saturday, Nov. 11, print edition of the Demopolis Times.)