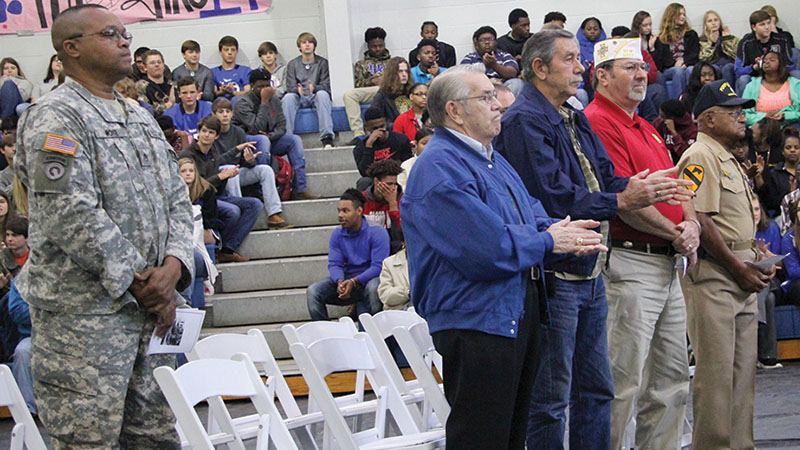 Local veterans were invited to a Veterans Day program hosted by the Demopolis High School JROTC on Thursday.

In recognition of Veterans Day on Saturday, area veterans were honored this week during events held at Demopolis High School and Bryan W. Whitfield Memorial Hospital.

The DHS JROTC hosted the first of the events on Thursday. After recognizing the veterans in attendance and a performance by the JROTC Drill Team, VFW Post 5377 member Phillip Spence served as guest speaker.

Spence stated the “official” definition of a veteran, stating it did not fully describe the true meaning of being a veteran.

“Being a veteran is more than a generic title. We live in a nation that is the most prosperous and powerful in the world and that is because of those who made the oath to protect us from enemies, foreign and domestic. You can all sleep well tonight knowing that there are men and women making the sacrifice to defend you,” he said. 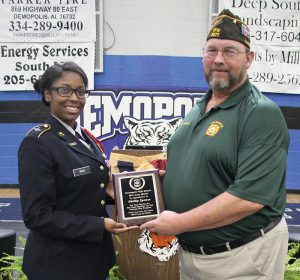 “When you see a veteran in front of you, you know that is a person who loves you. You are the reason they serve. All veterans ask of you is that you work hard in school, build and care for your families, and build a career and life that you love. Take what you have been given and do something with it; something for your country. This is the best way to honor those who are veterans. Our dream is for you to never know war,” he said.

On Friday, VFW Post 5377 held its annual Veterans Day Program and Flag Replacement Ceremony on the grounds at BWWMH.

The DHS JROTC presented the colors and then, along with Boy Scout Troop 41, replaced the flag that flies in front of the hospital.

VFW Post 5377 Commander Jay Russell introduced the guest speaker, Barry Brackin, who served in the Marine Corps from 1966 to 1969 and is a Vietnam veteran.

“We are here today to honor and show our respect to the men and women who have served and who have shown bravery and honor under fire and adversity,” Brackin said. 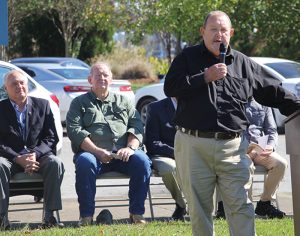 “Let us never forget those who are still serving. Every hour, every day, every year since 1776, there have been young men and women standing in harms way to protect you and the freedoms we hold dear.”

“I wish we lived on a planet where war is not necessary; where evil is replaced with love and charity. But we don’t and probably never will. But, while evil will likely always exist, there are also good and brave people who will stand between us and tyranny,” Brackin said.

Richard Rogers, a U.S. Army veteran of the Vietnam War, also spoke and encouraged those in attendance to give to their nation in some way.

“Think about how you can offer yourself in some way,” Rogers said. “If you are not able to join the military, do things for your community … whatever you can do for your country.”

Also participating in the program was Jill Tutt who sang “The Star Spangled Banner” as the new flag was raised.

(This article originally appeared in the Saturday, Nov. 11, print edition of the Demopolis Times.)