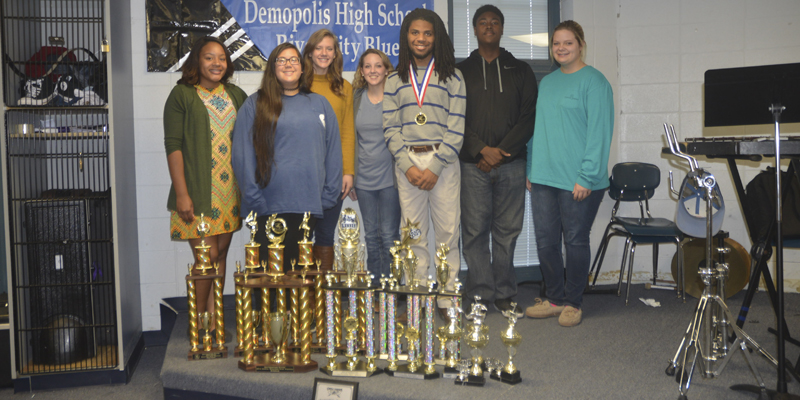 At Opp, the band received an Excellent rating in percussion and Superior ratings in drum major, majorette, dance line, color guard and band. The Best in Class honors were awarded out of 12 bands, the largest class in the entire competition.

“That was extremely significant for these kids,” Director of Bands Demetrius Scott said.

They rehearsed a total of 96 hours, spread across 12 weeks, in preparation for their competitions and various performances. This does not include band camp, which took place for about three weeks in late July and early August.

Assistant Drum Major Tatum Owens said that the rehearsals prepared them well for the competitions.

“We do rhythm exercises and then we go over our pieces of music,” she said.

According to Owens, competing was “stressful, but it was very fun.”

Scott said he focused on teaching the students the fundamentals, such as standing at attention, marching roll step and musicality, which resulted in their wins.

“It’s more than just ‘Oh a band goes out there dressed up, and they’re just moving around’. All of these fundamentals have to be executed to the highest standard,” said Scott.

The band is expected to grow from 69 students to 100 by the next school year and is accepting donations to help pay for new uniforms, which Scott estimated will cost $50,000. A sample uniform will be made before Christmas for the community to view.

“I’ll be thrilled to see the band grow,” said Owens, who plans on participating in band in college.

“I suggest anybody do it. If you’re interested in music, I suggest participating in band,” she said.

The band is currently preparing for upcoming Christmas parades and concerts, including Christmas on the River.