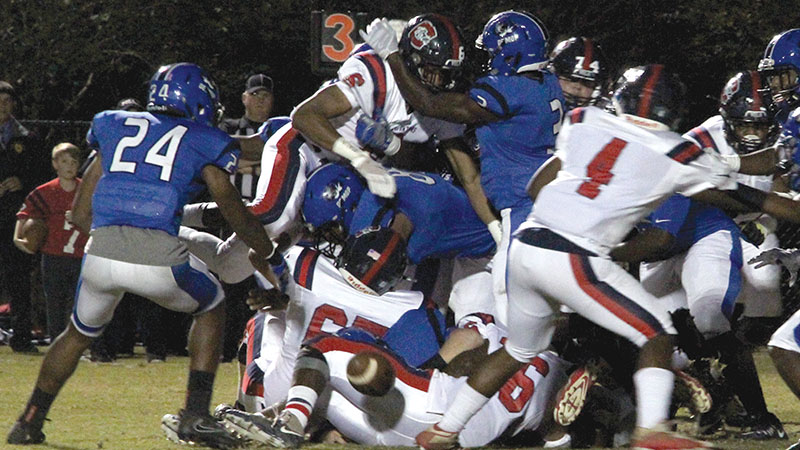 In their first possession, Central-Clay moved the ball to the 1-yard line, but the Demopolis defense forced a fumble that would be recovered by Keshawn Johnson.

Demopolis High School has been leaning on its stout defense and running game so far in the 2017 season, but it was the passing game that led to points in the Tigers’ 17-6 second round victory over Central-Clay County Friday night.

The Tiger defense held Central-Clay to 271 total yards, 172 of those coming on the ground.

Demopolis had 131 rushing yards while quarterback Andrew Patterson wen 9-of-18 for 237 yards through the air. Tyquan Alston had a big night with 132 receiving yards, including a 90-yard touchdown reception.

The DHS defense was knocked on its heals when the Volunteers took its first possession of the game, driving the ball all they way to the 1-yard line. After being held on first down, the Vols tried to go over the top, but the ball was knocked out and recovered by Keshawn Johnson for the Tigers. That was as close as Clay-Central would get to the endzone until late in the game.

The next few series were all about defense and field position. It was early in the second quarter when Demopolis started to make a move, beginning with a 31-yard pass from Patterson to Alston down to the 12-yard line. The Clay-Central defense held tough, forcing a 25-yard field goal from Malaki Simpson for a 3-0 lead with 7:46 to go in the half.

After the Tiger defense forced another punt, DHS would move the ball with a few runs by A.J. Besteder and A.J. Jackson before Patterson once again found Alston for a 10-yard gain to the their own 40. From there, Patterson found Anthony Jackson who outjumped a defender for the reception and then took the ball the rest of the way for the touchdown. Simpson’s point-after was good, giving Demopolis a 10-0 edge with 2:10 to go in the half.

The Tiger defense continued giving Clay-Central trouble. After moving the ball to midfield early in the third, it was Fred Haywood who got a sack that would force another Volunteer punt.

Clay-Central would get another chance after hauling in an interception near midfield laster in the third. A pair of unsportsmanlike conduct penalties suddenly had the Volunteers close to the redzone.  But, a holding penalty and another sack by Haywood sent Central backwards, leading to another punt.

Then, despite being backed up at their own 10, Demopolis would put themselves securely in the drivers seat when Patterson found Alston open and would take it the full 90 yards to the endzone giving Demopolis a 17-0 lead.

The Volunteers would find the endzone with only 1:46 to play, making the final score 17-6, having missed a two-point conversion.

With the victory, Demopolis moves on to the quarterfinal round when they will travel to Vigor.

(This article originally published in the Saturday, Nov. 18, print edition of the Demopolis Times.)