Marengo pulls off 1A upset to advance 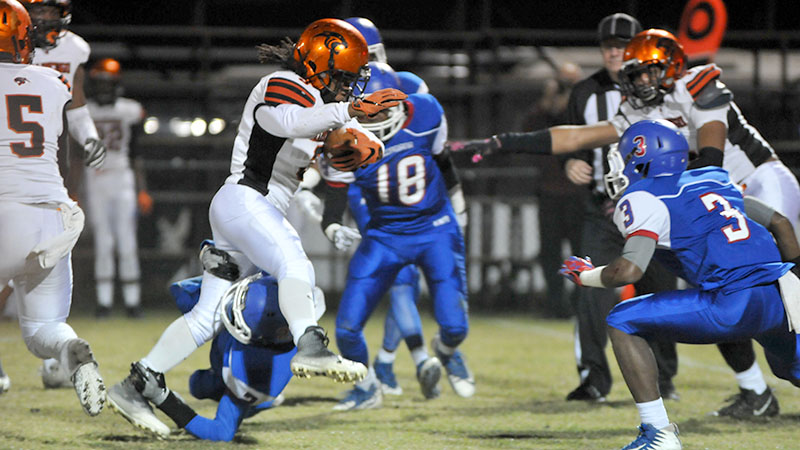 By JOHNATHAN BRYANT (For the Demopolis Times)

The Marengo Panthers accomplished a feat no other team could in 2017 by stunning the hosting Georgiana Panthers 18-0 in the second round of the state playoffs.

Marengo is the first team to hold Georgiana to zero points in four years.

The Marengo offense eventually wore down an initially resilient Georgiana defense on the team’s second drive, with running back Alphonzo Lewis bringing the ball to midfield on an 19-yard pickup.

Lewis and fullback Roosevelt Thompson traded blows to the Georgiana front line, until the former burst into the end zone untouched for a 2-yard touchdown run with 2:37 remaining in the first.

The Panthers answered on their ensuing drive, fighting to Marengo’s red zone, but a costly fumble and subsequent turnover on downs ended Georgiana’s first and best chance to score.

A 28-yard quarterback keeper from Quindaris Ausbon extended the Marengo lead to 12 with just over 5 minutes to go in the half.

Marengo forced yet another Georgiana three-and-out to give their offense a chance to strike before the half with 2 minutes remaining.

Several well-managed sideline sprints from Lewis kept the chains moving and the clock stopped for Marengo before another 10-yard keeper from Ausbon took the wind from Georgiana’s sails permanently at the half.

Marengo head coach Eberne Myrthil gave all of the credit to his coaching staff for shutting out a Georgiana team that had averaged 47 points per game.

“We had a great defensive scheme,” Myrthil said. “Our defensive coaches, both J. Waters and K. Waters, and our defensive line coach, Coach Pritchard, put in a game plan, and our guys buy into it. I love the fact that I have the staff that I have.

“We were challenged all out, and everyone told us that this team was going to embarrass us. A lot of people said we weren’t ready to challenge a team like this who was 11-0. That was fuel to our fire, and I think we earned some respect beating a great Georgiana team.”

“They weren’t like the other big teams we’ve played; they were big and they could move,” Powell said. “And I knew coming into the game that it was going to be tough. Tonight, they played better than we did on both sides of the football.”

Marengo will face another undefeated opponent, the Wadley Bulldogs, in round three.