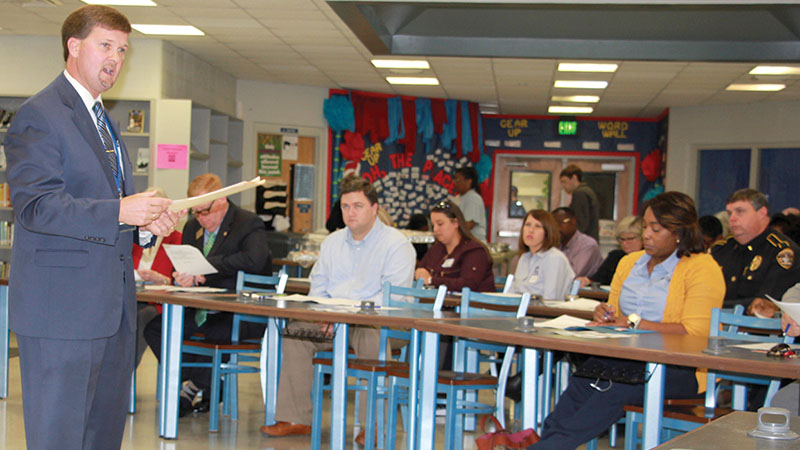 During the event, Superintendent Kyle Kallhoff and principals at each of the system’s four schools discussed recent accomplishments and future goals of the system.

Kallhoff addressed a number of issues, ranging from the system’s five-year strategic plan to enrollment trends. He said there would be a “check-up tour” held in March that will “provide updates and progress” on the system’s goals. The tour will include meetings at the board of education office, as well as other visits to several local churches and civic clubs. 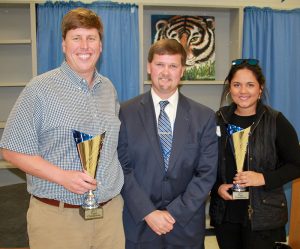 Demopolis Superintendent Kyle Kallhoff, center, presents Jason Windham, left, owner of Batter Up, and Gabby Lewis of Personal Touch with the Tiger Spirit Award for their ongoing contributions to the school system.

“We will discuss our goals and address the barriers we face in reaching those goals. Facing those barriers is where we need your help,” Kallhoff told those in the audience.

The superintendent also discussed the importance of renewing the city’s 3 mill tax allocated for local schools.  Voters in Demopolis will decided on its renewal during the Dec. 12 special election. The tax provided about $244,000 in funding in 2017, according to school officials.

“This tax is renewed every 10 years and is one of the things that separates us from other systems in the Blackbelt,” Kallhoff said.

Each principal of city schools also had time to tell the stakeholders about things going on at their school.

Westside Elementary Principal Roshanda Jackson discussed the positive response students have had to the new “Leader in Me” program.

“This program is built to help us see all children as capable leaders,” Jackson said.

Leon Clark, principal at U.S. Jones Elementary, said his school has taken a major step in teaching technology through its coding program.

“Our students are programming robots, which is a very detailed process, requiring lots of math, measurements, and thinking. If something does not work (in their programming) they have to go through the process as a team to break it down and find out why it didn’t work,” Clark said.

Demopolis Middle School Principal Brandon Kiser also discussed the coding program, which builds upon the skills learned at US Jones. He said the school hopes to continue building on the program.

“We have written a grant for a 3D printer that we can use with our coding to build things. In the future, we will be integrating our coding program with other classes,” Kiser said.

At the high school, Principal Blaine Hathcock said the school’s goal of being among the best in the state will require a full community effort.

“When a school system thrives, the community thrives and I want to thank you all for the things you do for our kids. You are vital to what we do as a school system,” Hathcock said.

Also during the event, Kallhoff presented Gabby Lewis of Personal Touch and Jason Windham of Batter Up with the Tiger Spirit Awards for the contributions to the school system.

“These are business owners who never say no. When we need something they are always there to help,” Kallhoff said.

(This article originally published in the Saturday, Nov. 18, print edition of the Demopolis Times.)