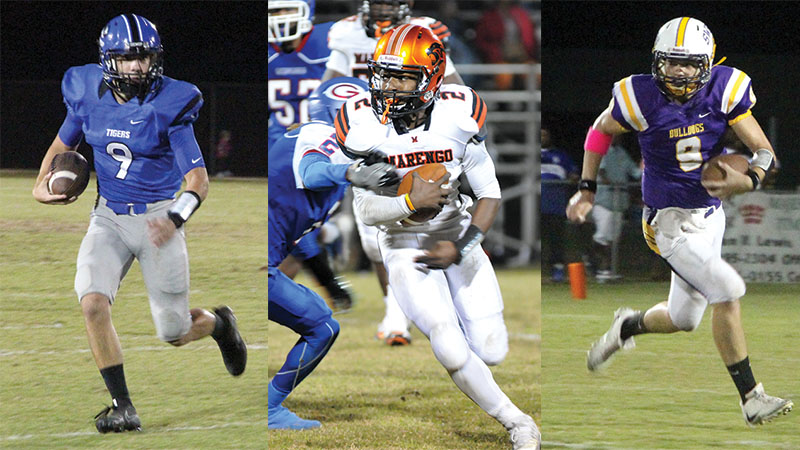 From left, Demopolis Tiger’s Andrew Patterson, Sweet Water’s Jonah Smith, and Marengo High’s Quindaris Ausbon are each looking to advance their teams to the state semi-finals.

Three Marengo County football teams have survived to the three round of the state playoffs — Demopolis, Sweet Water, and Marengo High School.

After consecutive home games through the first two rounds, the Demopolis Tigers will travel to Pritchard to face Vigor High School for the quarter-final round this week.

Demopolis is 10-2 on the season, having outscored opponents 409-112 through those contests. Both DHS losses — one coming in the first game of the season and the other in the final game — were both away games, losing to Thomasville and 7A Auburn.

The Vigor Wolves coming into this week’s matchup with a 9-3 record. The Wolves lost their first three games of the season to Blount, Baker, and Citronelle, before finishing the regular season with seven straight wins. They outscored their opponents by a margin of 294-150.

The Tigers and Wolves have split their only two previous matchups, with Demopolis having won the most recent, a 28-17 victory in 2015.

Vigor is coming into the contest ranked tenth in the Alabama High School Athletic Association’s poll while Demopolis is ranked eighth.

The winner of the Demopolis and Vigor game will move on to the semi-finals to face the winner of Beauregard at St. Paul’s Episcopal game.

The Sweet Water Bulldogs continue to roll after their 9-1 regular season. They defeated Brantley, 41-13, in Round 2 to advance to the quarter-final this week when they will face the Maplesville Red Devils. Maplesville advanced after knocking off  Talladega County-Central last week, 36-0.

Maplesville is perfect on the season, having outscored their 2017 opponents 570-103. Sweet Water’s only loss was to Thomasville early in the season. The Bulldogs are 10-1 and have outscored opponents 486-104.

Both Sweet Water and Maplesville have rich histories, so it is no surprise that the two have met a total of nine times. Of those nine games, Sweet Water holds a slight edge, holding a 5-4 record against the Red Devils.

The Marengo Panthers may have had the upset of the week in Round 2, having knocked off the second-ranked team in 1A, the Georgiana Panthers, in an 18-0 shutout.

With the win, Marengo will host the Wadley Bulldogs who are ranked fifth in the state.

Marengo is 9-3 on the season, outscoring their opponents 431-106. They have losses to Sweet Water, Mobile Christian, and Linden. The defeated Highland Home in the first round before their win last week over Georgiana.

Wadley is perfect 11-0 on the season, having run away with 1A’s Region 4, outscoring their opponents 608-76. Their post season consists of wins over Pleasant Home and Isabella.

This week’s contest marks the first time these two teams have met.

The winner would advance to the semi-final where they would play the winner of the Sweet Water vs. Maplesville, possibly creating a matchup between the two  southern Marengo County schools for a chance to advance to the state championship game in Tuscaloosa.