U.S. Army Maj. Major Walker, whose first name happens to be Major, accepted the next level of responsibility in his Army career on Oct. 20, 2017 when he was promoted to the rank of III Major. 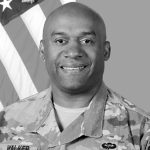 Maj. Walker is a graduate of Demopolis High School, Class of 1998, and was the first to receive a JROTC scholarship through the program.

He joined the Army in  June 2003, Commissioned.

He holds a bachelor’s degree in Electrical Engineering Technology from Alabama A&M University and a master’s degree from Webster University.

Family and fiends in Demopolis congratulate Maj. Walker on being the latest 335th Soldier to don the golden oak leaf.

(This article originally appeared in the Wednesday, November 18 issue of the Demopolis Times.)