Rep. Terry Sewell hosted a “Congress in Your Community” town hall meeting on Nov. 21 at Bryan W. Whitfield Memorial Hospital from 10 a.m. to 11 a.m. She used the meeting to brief attendees on three main points that she is focusing on in Washington.

First, she discussed health care. Sewell said the Affordable Care Act (ACA) is still “the law of the land” and encouraged signing up for it. She said the enrollment period for ACA for 2018 has been shortened and that the deadline to apply is Dec. 15. 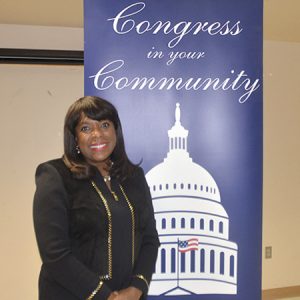 Congresswoman Terri Sewell visited Demopolis Tuesday as part of a series of “Congress in Your Community” town hall meetings.

Sewell said she admits the ACA is not perfect, but added that it still benefits many people, such as those with pre-existing conditions.

“Every American should have access to quality healthcare,” she said.

Sewell also said that Alabama residents did not receive the full benefits from ACA because the state did not expand Medicaid.

Sewell then spoke about the Children’s Health Insurance Program (CHIP), which had expired on Sept. 30 and has not been reauthorized yet.

She believes that it will be reauthorized, but it could be used as a bargaining chip for other legislation, possibly the budget for 2018, which was supposed to be set by Oct. 1. She said that congress is currently operating under the 2017 budget, but that will expire on Dec. 8.

Sewell said that she fights for rural hospitals. She recognized that there is a need for broadband internet access in rural communities, as well.

“That’s a part of the critical infrastructure. And you know what? It will help in the healthcare side because telemedicine is real. But you’ve got to have a connection in order to have telemedicine.”

Sewell believes that Congress needs to work together to create a replacement for ACA if it is repealed. She said that she will look for rehabilitative services, mental health services, help with drug addiction and maternity services in when assessing possible replacements.

She is also working on increasing the wage index for medical reimbursements.

She then explained that she voted against the recent tax bill that passed out of the House of Representatives but not out of the Senate because “the tax code does select winners and losers, and when I looked at the reform that was being offered, the people that I represent were in the losing category.”

According to Sewell, the bill would have increased the deficit by $1.7 trillion, capped mortgage interest reductions, removed student interest deductions, made student stipends taxable income, made only the corporate cuts and benefits would permanent and increased the tax liability for 336 million people.

“I think that this bill was not advantageous to the people that I represent, so I voted no.”

When the bill went to the Senate, the Committee on Finance voted against it, but Sewell says the Senate’s proposed tax bill, which is about to be voted on, isn’t much better. She said it will increase the deficit by $1.6 trillion, add back in certain deductions and bonds that the House Bill took away and will do away with certain tax credits “that encourage private investment in cities and municipalities.”

Lastly, Sewell said she is concerned about America’s cyber security, especially with the investigation into Russia’s interference with the presidential election.

“I sit on the [House Permanent Select Committee on Intelligence] and I do believe that cybersecurity is our next frontier of terrorism,” she said, adding that she is most concerned about election integrity.

She is also concerned about North Korea and said that the issue should be solved through diplomacy and that the current rhetoric between America and North Korea needs to stop.

When the floor was opened for questions, Commissioner Fred Armstead mentioned that J. Paul Jones Hospital in Camden was closing and asked what support Sewell was working to give to rural hospitals. Sewell answered that Camden partnered with UAB, for which BWWMH is a model, and they have “so far succeeded in saving the hospital.”

Another attendee asked if there will be funding allocated for broadband access. Sewell said that the Department of Commerce has limited resources, but she’s been pushing a bill for that. She also said that the current administration plans on focusing on infrastructure once a tax reform has been passed, and she plans on holding them to it.

Sewell was also asked about school funding. She said that there are grants available and that they are distributed by the Alabama Department of Economic and Community Affairs (ADECA).

Later, Sewell provided further comment on the partnership between UAB and BWWMH.

“I’m very grateful to UAB for stepping up and helping our rural hospitals. I am grateful for them seeing a need and filling it.”

Sewell is serving her fourth term in the House of Representatives representing Alabama’s Seventh Congressional district. She sits on the House Permanent Select Committee on Intelligence, House Ways and Means Committee, Steering and Policy Committee of the Democratic Caucus and Congressional Black Caucus. She is Vice Chair of the Congressional Voting Rights Caucus and the Outreach for the New Democrat Coalition. She is also a Chief Deputy Whip.