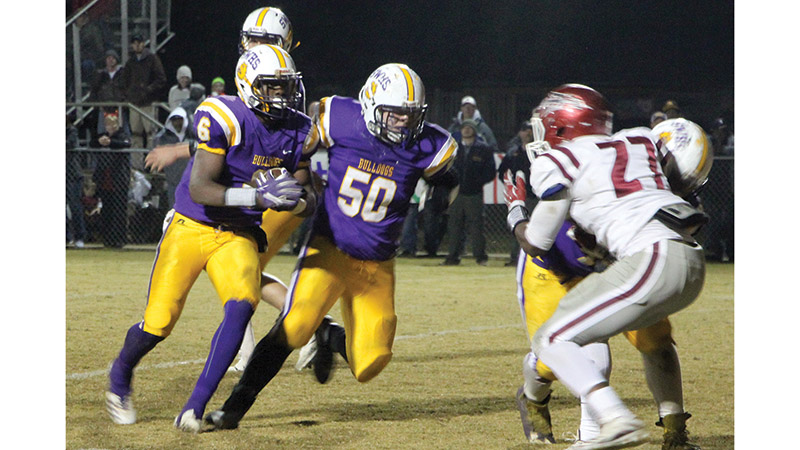 With consistency on offense and timely plays on defense, the Sweet Water Bulldogs took down the state’s top-ranked 1A team Friday night, 26-21, to advance to the state semi-finals.

The Maplesville Red Devils got off to a fast start, jumping out to a 14-0 lead. But, the bruising running of Sweet Water began to get on track as the Bulldogs clawed their way back.

On the first play from scrimmage, Maplesville’s Ryan Morrow found a hole and jetted down field 89 yards to the end zone for a 7-0 lead.

After forcing a Sweet Water punt on their first offensive series, the Red Devils took a different approach, driving the ball downfield, led primarily by Nathaniel Watson who had 45 yards on the drive. He would seal the scoring drive by hauling in a pass from Thomas Schoener for a 13-yard touchdown. The point-after made the score 14-0 with 4:06 to go in the first quarter.

After the shaky start, the Bulldogs began to settle in the second quarter. Starting a drive at the 42, Sweet Water went to Shamar Lewis for consecutive runs followed by a pass from Jonah Smith to Sasha Smith for a gain of 31 yards to the 18. A few plays later, Jacory Brown would take the ball in from five yards out to cut the lead in half, 14-7.

On their next series, Jonah Smith hit an open receiver for a 20-yard gain. Jaylon Williamson would move Sweet Water along with a 17-yard rush to midfield. A reception by Chance Broussard on fourth down kept Sweet Water’s drive alive and, along with a conduct call against the Devils, would lead to a 5-yard touchdown by Lewis, tying the game at 14.

Maplesville would drive the ball to the Bulldog 31, but an underthrown pass would be picked off by Jonah Smith, ending the threat just prior to halftime.

Sweet Water came out and took its first lead of the game on its first possession. After a few gainers, Patterson took the ball on a QB sneak, only to emerge on the opposite side of the pile and continuing downfield for a 58-yard touchdown. The point-after was no good, making the score 20-14.

Once again, Maplesville drove the ball downfield, and once again saw its possession end on an interception, when Sasha Smith hauled it in at the 14 for the Bulldogs.

Later in the third quarter, a 45-yard run by Lewis set him up for a 7-yard touchdown. Another missed PAT made the score 26-14.

Early in the fourth, Maplesville cut into the lead on a 20-yard pass from Schoener to Michael Harris, making the score 26-21.

Maplesville had two additional opportunities to take the lead. A poor punt by Sweet Water out of the endzone set up the Devils with great field position at the Bulldog 26. The got as far as the half-yard line, but could not push it in on fourth-and-goal, leading to a turnover on downs with 6:13 to go.

On their next possession, Schoener escaped several would be sack, only to throw the ball into the arms of Sweet Water’s Nathaniel Watson.