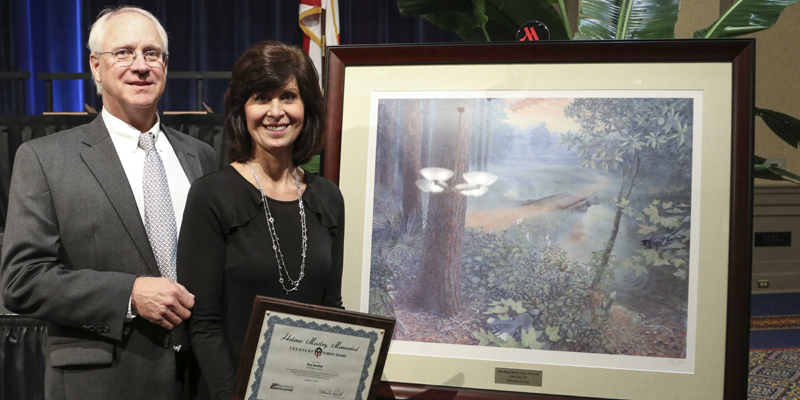 Roy Jordan of Marengo County was recognized for receiving the Helene Mosley Memorial Treasure Forest Award for the south region at the 2017 Alabama Treasure Forest Association (ATFA) and Alabama Natural Resources Council (ANRC) awards banquet in Florence Oct. 27. The award, sponsored by the ANRC and W. Kelly Mosley Environmental Awards Program, recognizes the most outstanding Treasure Forests in Alabama. Jordan, a past president of the ATFA, received $500, a plaque and a limited-edition forestry and wildlife print. From left are Jordan’s son-in-law, Jim Shewmake, and daughter Glenda, who accepted the award on Jordan’s behalf.

Rural roots and forest stewardship were celebrated during the Alabama Treasure Forest Association’s (ATFA) annual meeting in Florence, Alabama on Oct. 26-28. At the conference, the ATFA added a landowner leader to its ranks by presenting Alabama Gov. Kay Ivey a Treasure Forest certification for her property in Monroe County.

“I, too, understand and join with you in caring for what God has entrusted us,” Ivey said. “In fact, from the very, very beginning, God told mankind to care for the earth. With your efforts and your leadership, we’re fulfilling that responsibility.”

Ivey is one of 70 new Treasure Forest landowners certified this year.

“We’re pleased to honor Mike and our other outstanding award winners tonight,” said ATFA Executive Director William Green. “These landowners truly care for the land with the future in mind. They’re an asset to our organization and the communities they serve.”

Two Helene Mosley Memorial TREASURE Forest Awards were presented to Marengo County’s Roy Jordan and Greene County’s Robert Loper. The award, sponsored by the ANRC and W. Kelly Mosley Environmental Awards Program, recognizes Alabama’s most outstanding TREASURE Forests. Loper and Jordan, a past president of the ATFA, each received $500, a plaque and a limited-edition forestry and wildlife print.

Workshops ranged from predator management to the importance of tree genetics and included an update on southern pine beetle damage. Taylor Perkins from the University of Tennessee at Chattanooga also spoke on American chestnut restoration efforts.

A devotional breakfast from the University of North Alabama’s Bishop Alexander will close the conference Saturday morning.

The Treasure Forest Certification program was established in 1974 to promote the multiple-use philosophy of land management to support timber, recreation, the environment, aesthetics and sustainable, usable resources.

(This article originally appeared in the Saturday, November 25 issue of the Demopolis Times.)