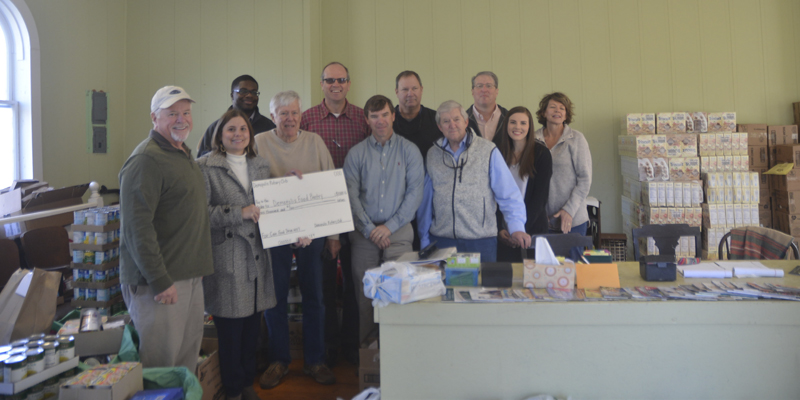 Demopolis Rotary Club held its fourth annual canned food drive this month, with several churches, clubs and schools throughout the community participating. On Wednesday, they delivered 1,900 canned goods and a monetary donation of $2,000 to the Trinity Episcopal Church Food Pantry.

Stanhope Brasfield, who is the purchasing agent of the food pantry, said the club delivered enough canned goods to last a month. He also said that they can buy another month’s worth of food with the money they received.

“We balance the budget with food drives,” he said.

The club has been holding the food drive since Nov. 1 and have collected canned goods and raised money through several different means.

Hunter Compton, secretary of the club, said Rotary and the DHS JROTC collected canned goods and money outside of Vowell’s Fresh Market and at DHS’s first round playoff game. Several churches, clubs and schools also participated. Multiple gas stations in town placed buckets by their cash registers to collect money, as well.

“We tried to spread it out more and get more community involvement,” Compton said.

At Westside Elementary School, each class competed against each other in the food drive, and the four winning classes received a wing party from Batter Up Sports Bar and Grill.

“With the help of other people in the community, we were able to match our highest monetary collection for this event. Combined with canned goods, it’s our best year for canned goods and monetary donations,” Compton said.

The food pantry serves about 200 people a week, with each person receiving eight canned goods. Brasfield described the food pantry as “supplemental” to the needs of the community.

For Thanksgiving, the food pantry also gave each family a ham. For Christmas, each family will be given a whole chicken.

“We appreciate the community support and we hope we can continue to do a good job and keep their trust,” Brasfield said.

(This article originally appeared in the Saturday, November 25 issue of the Demopolis Times.)