AG opinion: city may move ahead on statue plans

Damaged soldier that stood atop monument will be replaced

The Alabama Attorney General’s Office has rendered an opinion regarding the future of the city’s Confederate Memorial, stating the City of Demopolis is free to move  forward with a plan previously approved by the city council.

The Demopolis City Council voted in April to replace the soldier that stood atop a Confederate memorial with an obelisk. The motion was approved by a 3-2 vote. 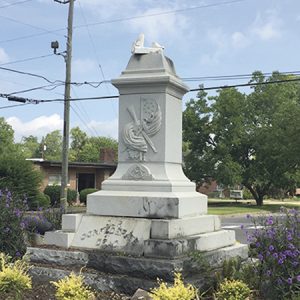 A photo of the Demopolis memorial following damage to a Confederate soldier that stood on top. The city has been cleared to move forward with a plan to place an obelisk in place of the damaged soldier.

The soldier fell from the monument and was damaged in July 2015 when, according to officials, a Demopolis police officer fell asleep at the wheel of a patrol car in the early morning hours, striking and damaging the memorial. It has been stated that the soldier would be repaired and displayed in some other manner.

After the approval to make the change to the monument, Alabama Governor Kay Ivey signed the Alabama Memorial Preservation Act in May. The law prohibits local governments from moving or renaming historically significant buildings and monuments that date back to 40 years or longer.

Upon the law being passed, Demopolis officials requested the Attorney General’s opinion regarding the local monument.

On Monday, the city received the AG opinion, which stated: “The Alabama Memorial Preservation Act of 2017 does not render void a vote by the Demopolis City Council to alter the remains of a Confederate monument that ceased to exist before the effective date of the act.”

The timing of the damage to the monument was one of the key facts in the AG opinion. “The city’s monument that had been in place for more than 40 years was inadvertently destroyed when the statue was broken into pieces and removed from the site. Because the monument ceased to exist at the time of the effective date of the act, the act’s prohibitions were not triggered. Accordingly, the city council’s vote is not void and the city may proceed with its plans for the remains of the monument.”

“I will call upon Councilman (Charles) Jones to reconvene the monument committee to come up with a design for the obelisk,” Laney said.

The soldier stood atop the Confederate memorial since its was erected in 1910 as a project of the Daughters of the Confederacy.

(This article was originally published in the Wednesday, November 29 edition of the Demopolis Times.)