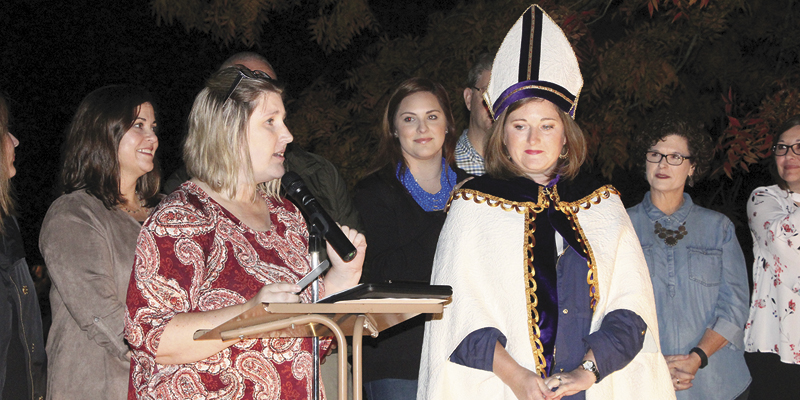 Christmas on the River 2017 kicked off this week with two special events that included the official naming of this year’s Special Child and St. Nicholas.

On Wednesday, at Bryan W. Whitfield Memorial Hospital, the naming of the Special Child coincided with the annual tradition of lighting the Love Lights. 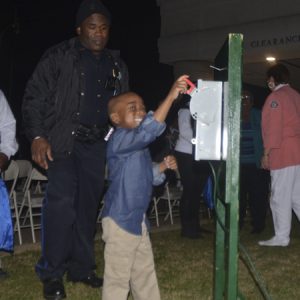 ABOVE: The 2017 Special Child, RC Clark, turns the switch that lights the BWWMH Christmas Tree during a ceremony Wednesday. Standing behind RC is his father, Ronnie Clark, who is a Demopolis Police Officer.
BELOW: Demopolis Mayor John Laney and Jennifer Swims count down to the official lighting of the public square Thursday. 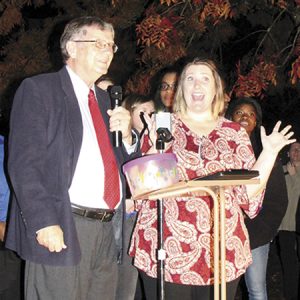 Clarke, a pre-kindergarten student at Westside Elementary School, is the son of Demopolis Police Officer Ronnie Clarke and Lawanda Clarke. In 2016, at the age of 3, Clarke was diagnosed with leukemia.

Since the diagnosis, Clarke has undergone treatments at Children’s Hospital in Birmingham and is now considered to be in remission. While Clarke was in the hospital last Christmas, this year he and his family looks forward to the COTR events and being home for the holiday.

“I want to thank those who nominated R.C. … it’s a big honor for us,” Lawanda said. “I also want to thank everyone for keeping him in their prayers and all the doctors for their help. And, of course, I thank God first and foremost.”

On Thursday evening, the Lighting of the Downtown Square event was held featuring the much-anticipated crowning of St. Nicholas.

Stephens is a lifelong resident of Demopolis and the wife of Kirk Stephens. She has three children, Bill, Molly, and Ed.

“Each nomination stated the same sentiments of selflessness, generosity, and kindness,” Swims said.

One nomination letter stated, “Each day, Betsy displays a spirit of giving and service to the community of Demopolis, especially to First Baptist Church as she is involved in many different ministries, including the media and sound ministry, children’s Wednesday night dinner, Wee School, bus ministry, and Girls In Action.”

Another nomination commented on Stephen’s service as president of the Demopolis City School’s Parent Teacher Organization.

“Since taking over the role of PTO president, both WES and USJ have received new playground and technology equipment that benefit every student in both schools. Whether it’s planning school fundraisers, planting flowers, painting picnic tables, building a playground, purchasing supplies for student projects or supervising children during duty free lunch, Mrs. Stephens always goes the extra mile to help. She’s made a positive impact on hundreds of student’s lives.”

Another nomination noted that Stephens never seeks recognition or praise for her volunteer efforts.

“She continues to tirelessly show our students and faculty that we are important and valued,” another nomination stated.

Another letter reads, “Betsy is the mother of three children, but in reality, I know she has served as a mother figure to many other children in this community.

“Betsy is a humble spirit with a servant’s heart come to life. Our community is a better place because of Betsy Stephens.”

Along with the naming of Stephens as this year’s St. Nicholas, Thursday also featured the lighting of the public square, led by a countdown by Mayor John Laney. Local children also participated in the annual Lantern Parade.

The Demopolis High School band and chorus provided seasonal entertainment and the COTR Pageant Courts were all introduced.

(This article originally appeared in the Saturday, December 2 edition of the Demopolis Times.)