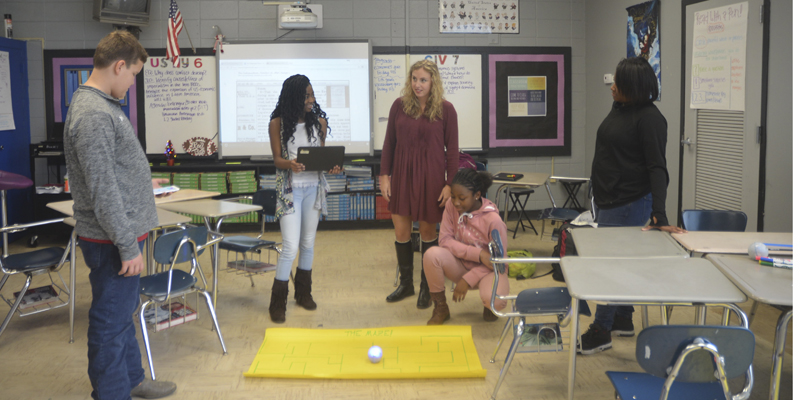 Students of Turner’s computer science class code a robot with commands, which they use to navigate a maze that they designed. Pictured are, from left, Jackson Beem, Va’kayla Williams, Carly Turner, Kiara Williams, Janiya Williams.

The grant will benefit the computer science class and the robotics class at DMS, with the funds going towards things like a 3D printer and accompanying software, iPad 4 minis, Lenovo Chromebooks, drones and programmable robots. Money from the grant will also pay for a Tynker subscriptions for the entire school, allowing every teacher to utilize coding tutorials in their own lessons.

“Teachers at DMS will use the computer science curriculum provided by Tynker to provide another means of differentiation and engagement within their respective content area classrooms,” Turner wrote in the grant application.

Turner’s computer science class currently has five students and is in its first semester. The supplies from the grant will help the elective course grow to full capacity. The class is designed to accommodate 50 students.

Turner believes that the problem-based curriculum of the course helps the students with more than just learning coding, such as critical thinking.

“Even if they don’t want to learn to be programmers, it still helps them learn to think in a different way,” she said.

Students use puzzles and games to learn the coding language. After a while, they use their knowledge to control robots and have them complete tasks and challenges, such as navigating a maze.

“I’ve seen a huge change in their independence. They’ll do it themselves or they’ll figure it out,” she said.

“Computer science is a great way to think and learn more logically,” said Kiara Williams. Kiara also said that when a student has trouble with a problem, the class as a whole works through it by “trying to help each other.”

Va’kayla Williams, another student enrolled in the course, said that video tutorials and constant retrying make the class “a way to think better and bigger.”

The goal for this program is to continue it throughout Demopolis High School, and coding is already taught at U.S. Jones Elementary School. Turner also hopes that a STEM lab will be added to the school in the future. She believes that the need for computer science skills, even the most basic ones, is necessary in the workforce because of the technology boom.

“Just being in a rural area and especially with the socioeconomic status with a lot of students there’s a lack of understanding about computer science of what it is. With this grant, we can teach them about this and possible career opportunities.”