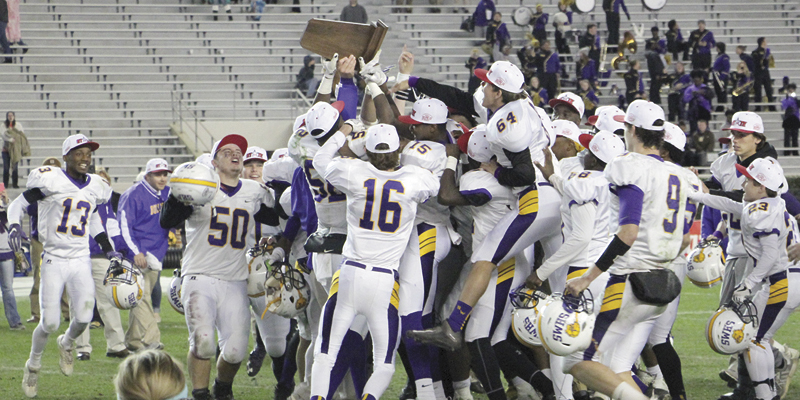 While Pickens County moved the ball from time to time, the Bulldog defense mostly held the speedy Tornadoes in check, giving up a total of 255 yards, only 22 of which came on the ground.

The rushing attack was in full force for Sweet Water, which rushed for 283 yards led by Jacorey Brown with 103 while Jaylon Williamson  and Shamar Lewis each finished with 95. 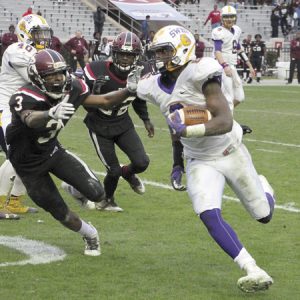 Senior Shamar Lewis was named the AHSAA Super 7 1A MVP.

Lewis, who was outstanding on both offense and defense, was named the game’s MVP.

For Head Coach Pat Thompson, Thursday’s win marked his first championship as head coach of the Bulldogs, although he was on the staff for two others, including their last title in 2010.

“It is unreal being the head coach of these guys,” Thompson said following the game. “It’s been crazy (preparing for championship game), but these guys stayed focus and I couldn’t ask for a better group.”

He added that he is proud to carry on the championship legacy of Sweet Water High School.

“This is huge for our community. We saw everyone here tonight … they’re there every week supporting us. It couldn’t be any bigger for our community to bring the title home to them,” he said.

In the first quarter, Sweet Water threatened to score on their first possession, but a fumble at 6-yard line was recovered by the Tornadoes who would drive the ball downfield where their drive stalled at the 38.

It was not until the second quarter that Pickens County mounted a 65-yard drive down to the 8-yard line where the converted on a field goal to take a 3-0 edge with 5:40 to go in the half.

That lead didn’t last long as Sweet Water gave the Tornadoes a heavy dose of their running attack and from the 2-yard line, Lewis took it in for the first score of the game. De’Shawnterion Blanks hit the point-after making the score 7-3 with 2 minutes before halftime.

The Tornadoes hit a big play in the next series to get across midfield and were looking to the endzone when Jonah Smith hauled in an interception at the 2, preserving the Sweet Water lead at the half.

The Bulldogs picked up in the second half where they left off, handing the ball to Lewis, Brown, and Williamson. But, one of the key plays for the Bulldogs was on a third down and 27 to go play when Jonah Smith hit Trenton Sams on a crossing route for a 50 yard play to the 25-yard line. This time it was Williamson who took the ball in from three yards out, extending the Bulldog lead to 14-3 after Blanks converted the point-after.

Pickens County would shave that lead after driving  to the Bulldog 10 where they would have to settle for another field goal, making the score 14-6 with 4:10 to go in the third quarter.

The defenses took over for the remainder of the game and it was the Sweet Water defense that came up with the key play that all but sealed the deal for Sweet Water.

On a first down-and 10 play from the Sweet Water 23, Pickens County quarterback Aljaron Edwards scrambled out of the pocket and as Jacory Brown was bringing him down for a would-be sack, the football was fumbled, bouncing into the arms of Lewis who took  it 64 yards the other way for a Sweet Water touchdown. The point-after at 7:55 to go in the game made the score 20-6.

Pickens County’s attempt at a rally was thwarted by Luke Davis who intercepted a Tornado pass at the 25-yard line.

Even later, on the Tornadoes’ last attempt at a score, it was the game’s MVP Lewis who once again made a play with another interception for the Bulldogs.

As the MVP, Lewis is credited with four tackles, including one for a six-yard loss on defense, made an interception in the final minute and also rushed for 95 yards on 16 carries.

The state title completes a season where the Bulldogs finished with a record of 13-1, the lone loss coming in the first game of the season to Thomasville.

(This article originally appeared in the Saturday, December 9 issue of the Demopolis Times.)