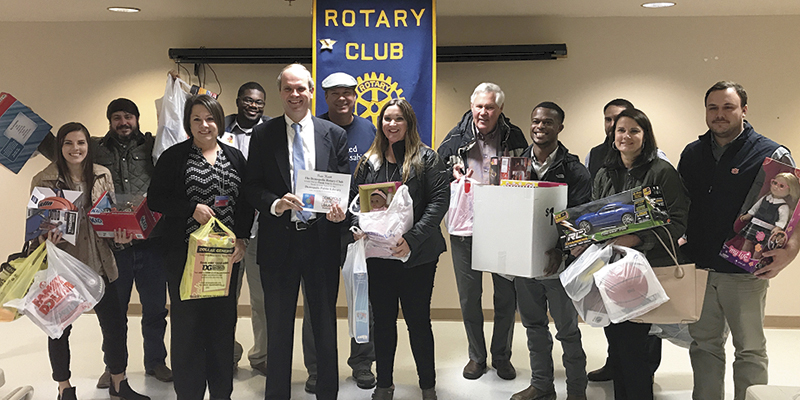 The Demopolis Rotary Club is one of the organizations helping fulfill wish lists this Christmas through DHR’s Project Merry Christmas campaign.

Originally benefiting foster children, Project Merry Christmas now supports hundreds of children and their families during the Christmas season based on their applications and income. Families will either be adopted by groups and individuals who are given their wish list or supported by DHR with donated toys or monetary vouchers.

While it is just a holiday event, DHR accepts donations year-round.

“If we don’t use them this Christmas, then we will use them next Christmas,” said Dawn Hewitt, who coordinates Project Merry Christmas and works at DHR as a service supervisor.

This year, Christmas will be provided to 600 children and their families through “toys or vouchers or somebody adopting their family.”

“It helps relieve stress off parents and make the children feel special that they have a Christmas,” Hewitt said.

Some of the wish list items for the children include athletic balls, educational toys and jackets. “I look at them, and it’s almost heartbreaking because they just need books,” Hewitt said.

This year, Project Merry Christmas has received the most monetary donations since Hewitt became the coordinator four years ago. Currently, they have $24,000 to support the families.

Hewitt said she was thankful for support of the community.

“If it wasn’t for all the generosity from the community then the people that need and applied for this program would not be able to get it,” she said.

However, she also said that the number of toys that have been donated is “smaller than normal for this time of year.” She asks that more toys be donated. Some toys that DHR has already received include action figures, dolls, stuffed animals, athletic balls and toy cars.

Hewitt believes that the generosity of the community benefits more than just the families in Project Merry Christmas.

“I think that is puts aside all the politics and all the different beliefs … it brings everybody together,” she said.

Donations can be dropped off at the Marengo County DHR office in Linden on 701 S. Shiloh St. For more information, call Dawn Hewitt at 295-2000.

(This article originally appeared in the Saturday, December 9 print edition of the Demopolis Times.)