Brown Bags for the Holiday 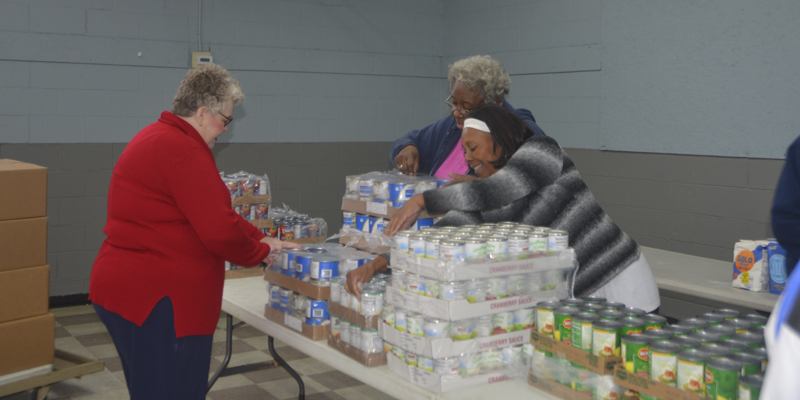 Volunteers work Thursday at the Jones Recreation Center to organize and bag food items that were distributed to those in need the same day. Pictured are, from left, Charlotte Jones, Ola Nixon, and Sandra Banks.

Women of Faith, Friends of Theo Ratliff team up to distribute food to community

The Women of Faith of Demopolis teamed up with the Friends of Theo Ratcliff for their first-ever Holiday Brown Bag program on Dec. 14 at Jones Recreation Center. Holiday Brown Bag is a same-day distribution program delivering brown bags packed with food to those in need in the community.

Willie Dillard, who introduced the program to the Women of Faith, said that it serves “anybody that’s in need” such as homebound seniors and those whose income is at or below the poverty level.

“A lot of people don’t realize that around the holidays is the toughest time for people to try to put food on the table, especially when their funds are already limited,” Dillard said.

The next holiday distribution date will depend on the funds raised and the organization hopes to hold the program four to five times each year. For Thursday’s distribution, the Women of Faith packed and distributed approximately 125 brown bags with food items such as canned chicken, corn and green beans.

“This is our first one and we’d like to get it off the ground. And, with God’s help, we’re going to expand,” said Rosa Thompson, who is president of Women of Faith.

(This article originally appeared in the Saturday, December 16 issue of the Demopolis Times.)