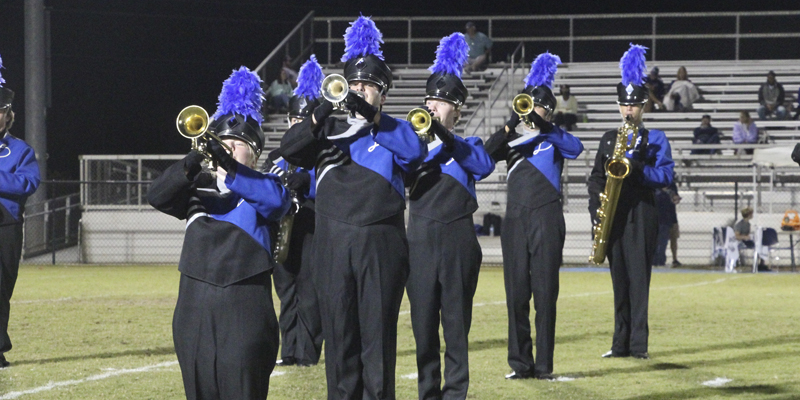 The River City Blue Marching Band of Demopolis High School performs a halftime show during a football game this fall. Next year, the band will prepare to take the field at the Superdome where it will perform at the 2019 Sugar Bowl.

Demopolis High School’s River City Blue will join other bands from across the country while performing at the 2019 Sugar Bowl. The band was invited by WorldStrides OnStage to play at the Mercedes-Benz Superdome during halftime as part of a mass band.

The marching band will be able to turn this performance opportunity into an educational trip, as well, touring the historic city of New Orleans when they’re not rehearsing for the show.

Director of Bands Demetrius Scott said he checked his voicemail a couple of months ago and received the invitation for River City Blue to perform. From there, he has exchanged information and begun planning for the trip in a year’s time.

“It was kind of surreal, because they told us that that’s not something that every band gets to go and do. It depends on the musicality and caliber of the group,” he said.

While he shared the news with the “necessary stakeholders,” the students didn’t find out until it was formally announced during a Christmas concert on Dec. 12.

“To see their faces on stage in front of all those people was really, really priceless. And, for some of these students, what people don’t realize is this is sort of the chance of a lifetime. This doesn’t come around a lot of times in everybody’s high school career.”

Scott said they received the invitation based on their past performances during at the 2015 Russell Athletic Bowl and Macy’s Holiday Parade at Universal Studios in Orlando, Florida.

For now, there are only two things Scott can focus on: funding and sound. Luckily for Scott, he has some special assistance with fundraisers for the River City Blue. The Band Boosters, a support group for the marching band that, according to President Gus Weiss, supports 99 percent of operations of band.

“I just enjoy kids having something that’s going to be culturally fulfilling for them to do,” Weiss said.

Some of the things that the Band Boosters are responsible for include repairing and purchasing instruments, chaperoning and making sure the band members are fed while on trips. They are also responsible for raising the bulk of the band’s funds, with fundraisers like car washes, coupon sales and band merchandise.

Scott estimated that the trip to the 2019 Sugar Bowl will cost between $800 to $900 per student. River City Blue is also trying to raise money for new band uniforms and the Bands on the River marching band competition that DHS will be hosting in September.

Even with all that, Scott said that there is “no doubt in my mind that we can do it.”

Just like with the finances, Scott has some additional support in preparing the band for their performance in the Sugar Bowl: the band itself.

Scott thinks that the band playing in the extended football season as DHS was in the playoffs and at Christmas on the River gives the band a taste of the large, adrenaline-filled crowd that the band will play for at the Sugar Bowl.

“They have performed this year in front of some very big crowds, not only here at Demopolis but at competitions, and I think that they are well-prepared for it.”

Kelsei Elmore, who plays alto saxophone and will be a junior at the time of the Sugar Bowl, agrees with Scott.

“We have improved a lot, and it’s going in a positive direction. I think by 2019 we’ll be well-prepared to go to the Sugar Bowl, because we’ve come so far already. There’s no telling where we’ll go next,” she said.

Elmore, along with trombone-player Ariel Williams, described the band under Scott’s leadership as “the new and improved River City Blue.”

“Mr. Scott will make sure we’re prepared for everything we need to be prepared for. He’s always taking time out of his everyday life to come and help us with what we need,” Williams said.

Scott has a similar confidence in the band, not only with their upcoming performance in the Sugar Bowl and hosting Bands on the River, but also with their increase in membership for next school year.

“The future is very bright for the River City Blue.”

(This article originally appeared in the Wednesday, December 20 issue of the Demopolis Times.)