Ever since its introduction in 1958, Black Warrior EMC’s Christmas Tree of Lights has been a tradition each holiday season in Demopolis. The 320-foot-tall display at BWEMC’s main office building is the first thing people see when crossing Rufus King Bridge at night.

The tradition started when a bookkeeper went on a family trip to Virginia and saw a unique tree of lights. When she came back, she told the general manager at the time, Bernard Swanzy, about it, who began designing his own display. 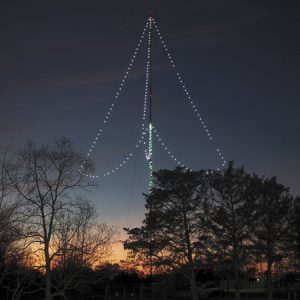 The Christmas tree above the office of Black Warrior Electric has been on display each holiday season in Demopolis since 1958. At 320 feet tall, it is comprised of over 250 lights.

Since then, the Christmas Tree of Lights, along with the communications tower, has undergone necessary renovations and maintenance.

“Our tower was completely renovated several years ago to meet new standards. Last year we totally rebuilt the Christmas tree by replacing all the wiring and sockets and began using LED bulbs. Each year around the second week in November we let the strands of lights down and replace all the bulbs that have been weathering all year,” General Manager Daryl Jones said.

The tree of lights is comprised of over 250 lights lining the guy wires that stabilize the communications tower at the main office. It also acts as an optical illusion by appearing to be slowly turning as travelers drive into town on U.S. Highway 80.

The once red, blue and green bulbs have been replaced by white as the colored bulbs became harder to find. In 2016, the tree was rebuilt using new energy-efficient LED technology.

“This year we used the latest LED outdoor bulbs and have received the most compliments I can ever remember. The new bulbs seem to have a glow like never before,” Jones said.

The tree is lit from the day after Thanksgiving, ushering in the following week’s Christmas on the River celebrations, until New Year’s Day each year.

The long-standing tradition remains a favorite of Demopolis residents, and the sight of it leaves many speechless the first time they see it.

“Each November we start receiving calls regarding when will the tree come on … Many travelers detour into our parking lot at night just to get a closer look and take a quick picture. Young children are awed each year when they see it for the first time.”

(This article originally appeared in the Saturday, December 23 issue of the Demopolis Times.)