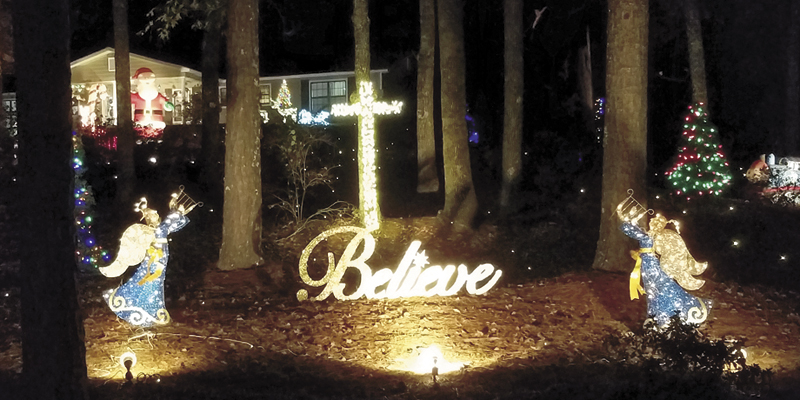 Mike Jones began decorating his home for Christmas with lighted decorations for his grandchildren, but over the years has become a sight for all to enjoy.

Mike Jones of Gallion has been steadily growing his Christmas display for about eight years. It started small with placing a Christmas tree on the hill behind his home to please his grandkids and has since grown to a “couple of acres” of lights, trees and decorations.

“It didn’t really start out as a display that people came to see. It just started for my grandkids,” Jones said.

This year is his biggest year yet, with 35-40 Christmas trees, a candy cane lane, safari animals, a nativity scene, snowmen, tin soldiers and much more. Jones said that he worked “most of the day” for four and a half weeks with no additional help on his display so he could light it up on Thanksgiving until New Year’s Day.

“When I started doing this, I wanted it to end up looking like what you’d see on a Christmas card,” Jones said.

According to Jones, while he sometimes has to retire or replace decorations that have been weathered too much, there isn’t much upkeep to his decorations.

“I don’t really have a lot of maintenance because I just secure everything real well,” he said, adding that sometimes deer and squirrels damage his display, usually by chewing cords in two.

He said he normally plans things out by simply walking around his property, though he already has some new decorations picked out for next year. While to some it may not look like it has an overall theme, Jones said that there is one thing he tries to achieve each year.

“I try to make it as colorful as I can.”

Jones is proud of the fact that so many people enjoy his decorations. He said that parents will walk around with their children and take pictures and that a bus carrying nursing home patients has driven by, letting the patients enjoy the view.

“I’m glad there’s a lot of people that tell me they enjoy coming out and looking at it.”

His favorite story, surrounding his favorite decoration, involves an older neighbor who has since passed.

“I have a horse and carriage that I’ve had for a long time and will probably need replacing soon. It’s one of the prettiest things I started off with,” Jones said.

According to Jones, his decorations total to “a few thousand dollars,” with new additions costing about $600 each year. It’s not all out of his pocket though. Jones has also been given several decorations, including his Christmas trees. He also said that he has two miles worth of cords for his lights.

Despite all the effort, Jones has no plans of quitting any time soon.

“As long as I’m able, this will probably be my little end of the year project.”

(This article originally appeared in the Saturday, December 23 issue of the Demopolis Times.)