BWWMH recognizes its 2017 Department, Employee of the Year 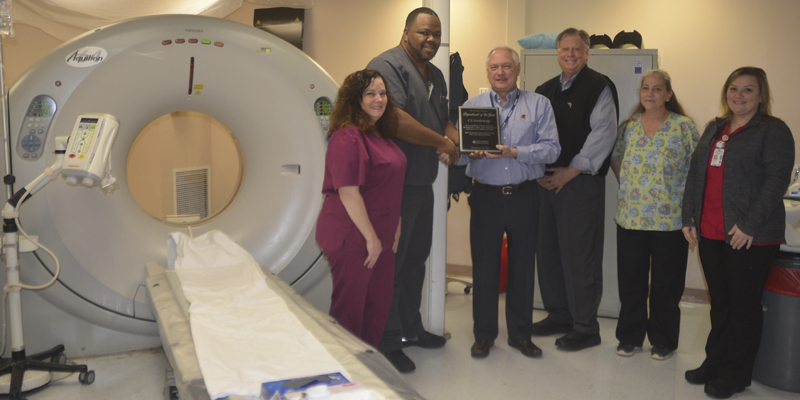 Abrams said the department works mostly with inpatient and outpatient care, as well as emergency radiology. They see about 20-30 patients a day, each one needing a different study, such as the head, neck or abdomen. Some may need more than one study done as well.

Abrams also said that he deals with nervous patients a lot and does what he can to comfort them. 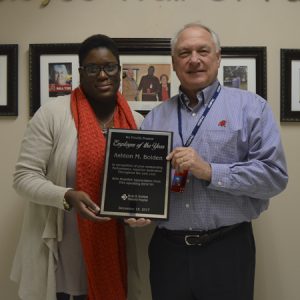 Ashton Bolden, pictured with BWWMH’s CEO Arthur Evans, was named Employee of the Year. Bolden is a registrar in admissions.

“The best thing to do is to limit the amount of people that are in the room because a lot of people get antsy when you have three or four people in a room,” Abrams said.

He said he prefers to be the only person in the room so he can talk to the patient and help them relax. He emphasizes to the patient that if they are calm, the CT scan will be over very quickly.

The CT/Radiology Department sometimes provides emotional support to patients as well, as they work with a lot of elderly and cancer patients.

“You’d be surprised—just listening—how much it will help,” he said.

Abrams has been working in the CT/Radiology Department since 2001. He loves the department being recognized for its hard work, but didn’t know they were named Department of the Year until his daughter told him.

“She came up for the Christmas party Friday, and she texted me ‘Dad, I think you were named Department of the Year’ and I was like ‘Really?’.”

Abrams said the goal of the department is to keep patient satisfaction high because “if you don’t have patients, you’re not going to prosper.”

Abrams said one of the challenges of working in the department is conducting exams for so many different doctors at the same time.

CEO/Administrator Arthur Evans said that they were named department of the year for multiple reasons.

“First of all, they met all of the criteria. They met the budget and even exceeded it as far as revenue is concerned. Also, their Employee Relations Committee attendance during this past year was exceptional. Finally, they were voted on by their peers among the eligible departments. They were very deserving and have been doing a fantastic job in Diagnostic Imaging,” he said.

Kahler said that “X-ray and particularly CT has become instrumental in diagnosing many of the clinical issues that come through the hospital.”

Employee of the Year was also named on Dec. 15. Registrar Ashton Bolden works in Admissions at BWWMH. She said her main duties involve registering patients with appointments, out-patient testing, referral labs and paperwork.

Bolden said she was surprised when she received the award.

“I assumed it would be Mom,” Bolden said. Her mother also works at the hospital.

Bolden said she has worked at the hospital for “a little over three years if I’m not mistaken.”

(This article originally appeared in the Wednesday, December 27 issue of the Demopolis Times.)