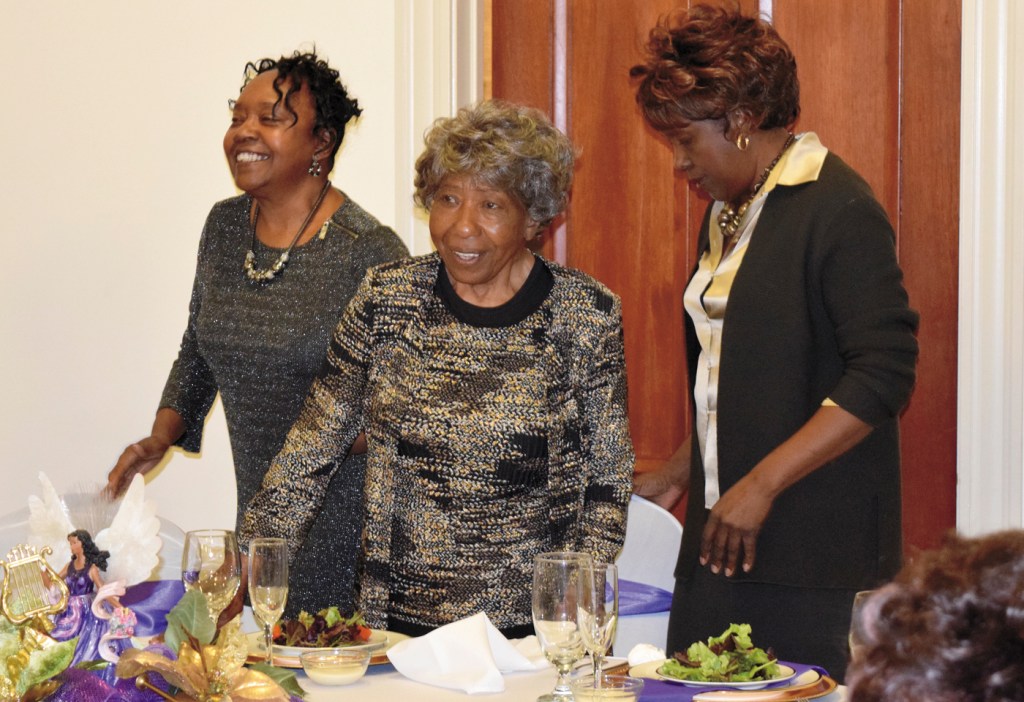 Pearl Allen Norman celebrated her 100th birthday with family and friends on Saturday, Dec. 23, at Rooster Hall in Demopolis.

The hall was regally decorated in purple, gold and white, and the tables were centered with Christmas Angels surrounded by golden horns and clouds of gauze.  The decorations contributed to the joyful spirit of the celebration.

Norman, whose actual birthday is Dec.17, is the daughter of the late Jim and Alberta Burns Allen, both from Demopolis. She married the late Joe Black Norman and together they had seven children: Mary, Audrey, Fredric (Carol), Irene, Joe (Virginia), Sandra (Myles) and Jeanette.

Norman, lovingly referred to as Ms. Pearl, Aunt Pearl or Cousin Pearl by attendees in their shared memories, is a dedicated mother and spiritual teacher, especially to young people.

According to most of the guests, she “always had something to tell you about the Lord,” whom she acknowledges as the reason for her longevity.

Specifically, she says that “it is my faith in God that has brought me this far.”

Pearl loved to learn as a child, excelling in English and the language arts.

“We continue to be amazed that at this age she can recite verbatim poems she learned in grade school,” said her daughter, Irene.

In her senior years she still loves to learn. She began taking piano lessons at age 98 because she always wanted to learn to play.

In recognition of her milestone birthday, Norman received proclamations from U.S. Rep. Terri Sewell; Gov. Kay Ivey, and Mayor John Laney, as well as resolutions from the Alabama Senate and House of Representatives.

All acknowledged her community service:  volunteering at the polls during elections, raising money for the American Cancer Society and the American Heart Association and feeding the hungry, both spiritually and physically.

(This article originally appeared in the Saturday, December 30 issue of the Demopolis Times.)