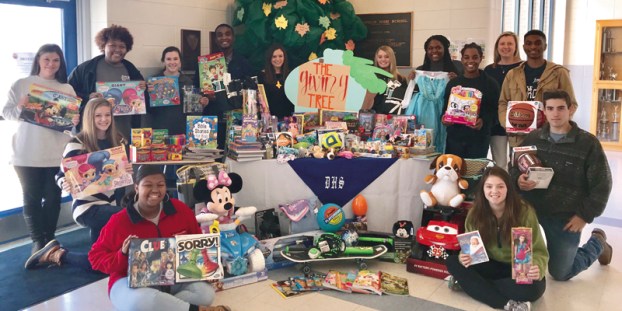 Demopolis High School’S FBLA project, “The Giving Tree” is being described as a huge success.

FBLA students collected gifts for children in need this holiday season. The donations and gifts were provided by DHS and Demopolis Middle School students, as well as various student organizations that collaborated in order to provide a very special Christmas surprise for children.

“What better way to experience the joy of giving to others than providing a child in need with a Christmas surprise.” said DHS FBLA Sponsor Kelly Gandy. “It was nice to see the joy these students experienced from giving to others.”

The Giving Tree was set up early November in the DHS lobby and outside Laura Holley’s office at DMS. Students were encouraged to find a leaf containing a special gift that was wanted by a child in need. FBLA students Taylor Vail and Makayla Durden helped organize the project and collected toys until Dawn Hewitt, DHR representative, picked them up to be sorted and distributed for Christmas.

(This article originally appeared in the Saturday, December 30 issue of the Demopolis Times.)